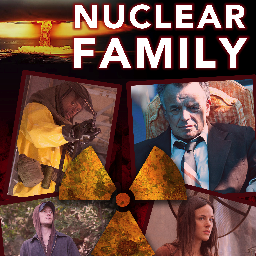 I know I am late to the party on this one as it was made two years ago. But let's be honest, how often does anyone peruse the Syfy website or phone app? Unless they're looking for the next giant crocodile movie starring Debbie Gibson - nobody. Nobody but me, I suppose.

"Nuclear Family" stars Corin Nemec as the dad, who along with his wife are searching for their son in a post nuclear apocalypse world. They were on the brink of divorce as they see the mushroom cloud, the ties that bind, eh?

However, nothing is ever as it seems in this terrific plot-twisting mini-mini-series. Ray Wise, who previously and delightfully played The Devil in "Reaper," is the prime bad guy here as well. His evil is delicious and Emmy worthy.

Like the other SyFy online mini I loved, "The Mercury Men," I wish they would make more programming like this, and actually broadcast it.