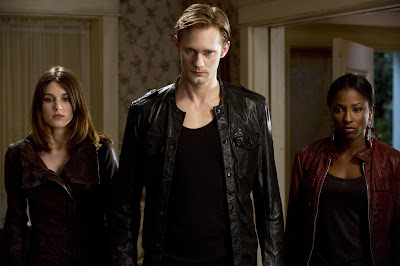 Regular readers know how much I love HBO's "True Blood." I even reviewed every episode of season three here on the blog. Now, in its sixth season it has started to go sour for not just myself, but for a lot of fans. Here are just a few reasons why, and not just because Sookie and Bill and/or Eric are not still together.

From the beginning, within the show's credit sequence, and with references like "God hates fangs" and "coming out of the coffin," the vampires of "True Blood" have always been a metaphor for the gay rights movement. At times the analogy has become quite uncomfortable, while happily when homosexuality has been shown in the world of the show, it's been normal and accepted. 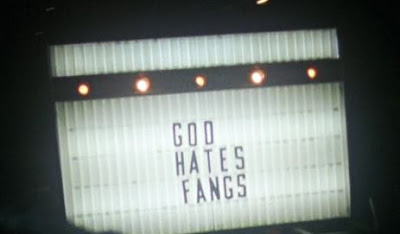 This makes "True Blood" a welcome fence post in modern television, but this season has been different. It's cutting too close to the bone. The in-story escalation of anti-vampire protests has produced some frightening parallels, the most horrifying being the dragging to death behind a car of a young vampire in Texas.

We all know this happened to a young man a few years back, spurring on murders against race and gender minorities. I, like most viewers, turn to TV fantasy to get away from the cold darkness of the real world. I not only don't want to be reminded, I don't want to see such things trivialized in what has become a supernatural comedy drama. And with recent events in Russia these last few weeks, the vampire concentration camp subplot is even worse by comparison. There may just be such places for gays soon. 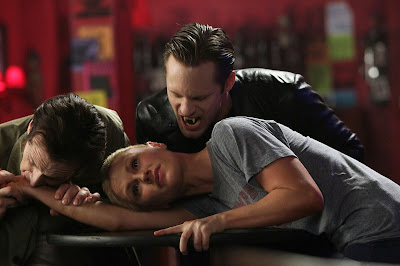 Those issues aside, the stepping down of show creator Alan Ball as writer and showrunner seems to have had a serious negative effect on the show. In my mind "True Blood" seems to have lost its way. The show this season feels more disjointed and less real.

The characters feel more like cookie cutter templates being moved about a chessboard than real people. They have been broken down to their basics and show very little else in the way of depth. Sookie, Jason, and Tara, for instance, might as well just be 'slut for supes,' 'dumbass,' and 'clever curser' for the lack of depth they have shown of late.

This just might be the end for me as far as "True Blood" goes. But for those still on the bandwagon, be sure to catch my friend and colleague Marie Gilbert's recaps/reviews of the current season of "True Blood" at Biff Bam Pop!.