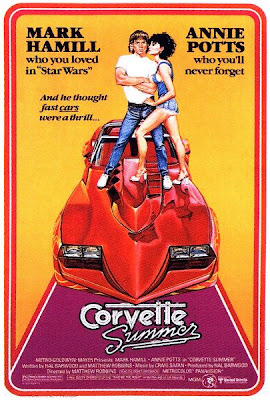 Corvette Summer ~ I guess it's impossible to relay to those who weren't there at the time just how huge this dumb little movie was when it came out. Corvette Summer was Mark Hamill's first film after Star Wars, and his much anticipated non-Luke Skywalker debut.

In the eighth grade, this was the biggest movie of the summer, period, and must see. If you didn't see it, you just weren't cool. I guess that's why I finally saw it on a Friday night on ABC-TV. It is worth noting that as I remember it, no one was really talking about this flick after they saw it. It's not Shakespeare, but I wouldn't be as rash to say it was all that bad either.

Other than Mark Hamill as a possibly slow high school shop jock, and Annie Potts in her film debut as a 'prostitute in training,' Corvette Summer is pretty much just a pretty typical teenage romp. It had a bit more heart than most, and could have easily been a TV movie of the week, but it wasn't bad.

Surprisingly it follows the Hero's Journey template as Luke, I mean Mark, tracks the shop class' prize Corvette Stingray across country to Las Vegas, where he learns some hard truths. 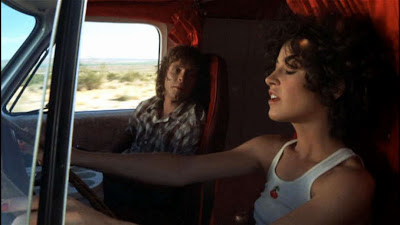 Annie Potts is fun, and look out for an awkwardly older Danny Bonaduce, there's also a cast of great 1970s TV and film character actors. Hamill is good, but after all these years I still wonder if his character is just mental because he's so obsessed with finding the car, or if he's just mental, period.

Corvette Summer was harmless and enjoyable, and a nice time capsule to high school and the seventies. I dug it then, and I dig it now.