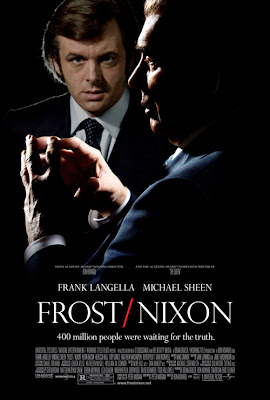 Frost/Nixon ~ Often memories are powered by significant news events. Everyone remembers where they were when the towers fell. When they heard about Kurt Cobain and about John Lennon, and of course, the granddaddy of such events – where were you when JFK was shot? This movie is like that for me.

Richard M. Nixon, and I’m giving my age away obviously, was the first US President I was aware of. I remember the turmoil of the war protests, and the Vietnam War itself on the news, the Watergate hearings that pre-empted all programming during the day, and the man’s frequent speeches to the nation in prime time. I specifically remember the day Nixon resigned; it was the same day of the first time my parents ever took me to a mall. I remember reading his memoir "R.N.," and I remember watching the David Frost interviews on which this movie was based.

The film is an interesting duel between two men who each have their admirable qualities and serious flaws as well, but I think the words of Kevin Bacon, in the minor role of Nixon bodyguard Jack Brennan, best sum it up as boxers squaring off verbally. This is a duel, not an interview, with two combatants who have underestimated each other tremendously. The intense performances from Frank Langella and Michael Sheen in the title roles make this a must-see film. Recommended.