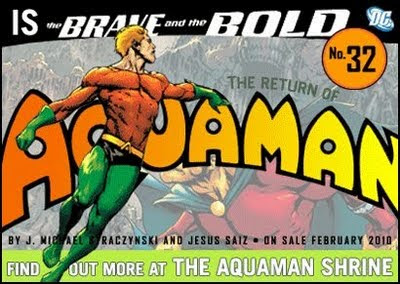 My friend Rob Kelly is a guy with a lot of passion. Whether it’s his work or his hobbies, he puts everything he has into it. Case in point – his brainchild the Aquaman Shrine. His love and respect for the Aquaman character knows no bounds and his passion to see Aquaman get the props he deserves is phenomenal.

When the sea king, in his most classic and recognizable form, was set to return in the pages of The Brave and the Bold, Rob set up a campaign to make sure as many folks as possible were both aware of and ordered the issue. Even here at Welcome to Hell I supported the effort. 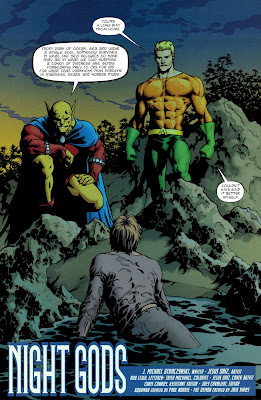 Yesterday Brave and the Bold #32 came out, featuring the classic Aquaman and Jack Kirby’s The Demon, and here’s my review...

Writer J. Michael Straczynski has been rolling throughout time and space in the DC Universe with his tales in Brave and the Bold, and this issue marks the subtitle on the cover ”Lost Stories of Yesterday, Today and Tomorrow” to further ensure he wouldn’t be hindered by continuity. Sometimes the complicated soap opera mythology of comics gets in the way of telling stories. If you want to read good stories and worry about that tangled mess – JMS’ Brave and the Bold is for you.

This issue, illustrated by frequent collaborator Jesus Saiz, is no different. This done-in-one story brings the classic Aquaman together with The Demon to stop a decidedly Lovecraftian elder entity from entering our dimension. An excellent short story, “Night Gods” tells the tale of Whitford Crane who is trying to find out if he’s insane or not by digging up his friend’s grave. When captured he relates the story from his point of view. The first two pages have the feel of the old 1970s DC horror comics. I could almost see the Phantom Stranger appearing next, but instead it’s the rather odd pairing of Aquaman and the Demon. 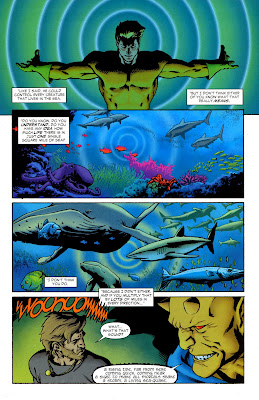 The unlikely duo get together once a year to stop this invasion of an elder god into our world, and poor Whitford is stuck in the middle. While Lovecraft is more in the Demon’s field, the focus is actually more on Aquaman. As a man of the sea himself, Crane has a healthy respect for Aquaman, and his narration lovingly paints him as the dynamic hero he is. The sea king’s underwater fighting prowess and especially his telepathic powers are displayed breathtakingly.

I agree with Rob wholeheartedly that this is the Aquaman we want, and hopefully sales on this issue should tell DC Comics how much we feel this. And even if you’re not an Aquaman fan, or even a comics fan, Brave and the Bold demonstrates what good storytelling is all about. Definitely check it out. Highly recommended.