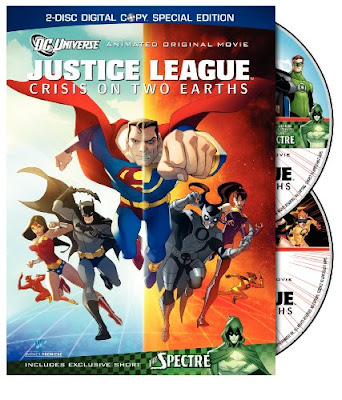 Justice League: Crisis on Two Earths ~ The evil twin premise is one that is as old as the hills, and this specific premise regarding the Crime Syndicate of Earth-Three and the Justice League dates back nearly four decades, and now it comes to animation in this new DVD. The science fiction (and now probable fact with string theory) concept of the multiverse has been a staple of DC Comics’ Justice League for a long time, and Earth-Three’s evil Justice League has become legend and a fan favorite. This story brings both elements together nicely.

The Crime Syndicate – Ultraman, Owlman, Superwoman, Power Ring and Johnny Quick - aren’t just our heroes with beards a la "Star Trek," but are fully realized psychopaths with different origins and backgrounds that only resemble the League. They rule their world with an iron fist and have murdered their world’s heroes, the last survivor of which is ironically Lex Luthor. Luthor escapes to our world to get the JLA to help stop the Syndicate. Hilarity, as they say, ensues.

All the characters involved in this animated feature are very in character with the comics, moreso to the cartoon of a few years back, but the comics as well, and I happily blame writer Dwayne McDuffie. He was a longtime writer in the comics, and a fan before that, but most importantly he was one of the main writers on the two Cartoon network "Justice League" series. Hal Jordan replaces John Stewart as Green Lantern, for no other reason I can think of other than his recent animated feature and upcoming live-action film. While I’m happy to see Hal, he doesn’t mix as well with the animated Flash as one would hope. 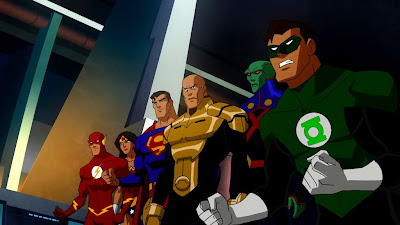 But I should note that this is not a continuation of the Cartoon Network series so this are really unjustified observations. To clarify that, this feature has an all-new voice cast. The voice casting is inspired on all levels, especially James Woods as Owlman. My only complaint in that area would be Mark Harmon’s Superman. It just doesn’t work for me – too brash, not confident or heroic enough in my opinion.

Crisis on Two Earths is filled with Easter eggs. One early on is when the two teams first meet, we get to see not only evil counterparts of the Outsiders, but the infamous Justice League Detroit as well. And the Marvel Family! That was a surprise bonus I was not expecting.

McDuffie has added an intriguing mob mentality to the Crime Syndicate organization, making them more of a real syndicate – a welcome twist. The five primary members are now 'made men' (and women), captains of their families if you will, and all the other metahumans are under their leadership.

Another Easter egg/twist is the identity of the US President of Earth-Three (let’s just call a spade a spade even though it’s never mentioned in the flick) – Deathstroke. And his teenage daughter Rose who protests against the Crime Syndicate is another. Her twist is even deeper as a romance blooms between her and the Martian Manhunter. Yeah, not only is he older, he’s millennia older. 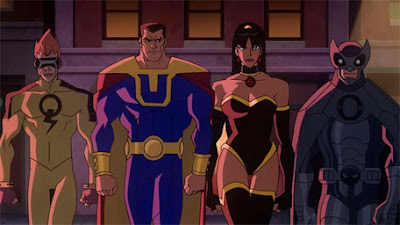 The families of the made men are made up of numerous evil counterparts of heroes from the Justice League’s world, allowing for not only a myriad of guest appearances, but also evil twisted versions of those characters. But logically I had to wonder, on the regular Earth there are a dozen or more villains to every hero – on this reverse-morality world, shouldn’t it be crawling with heroes? Or did the Crime Syndicate kill them all? 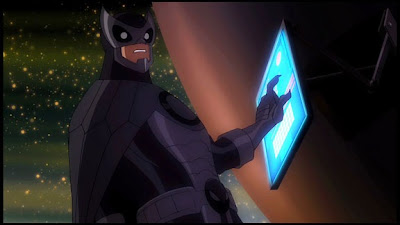 Speaking of killing them all, the story is about more than an evil twin tale or the JLA fighting their evil fascist counterparts, or even about J’Onn making Martian love to the squeaky clean Rose Wilson. The real villain here is James Woods’ Owlman. Batman’s darker opposite number is more than he seems – a sociopath who wants to not only destroy the world, but all worlds, all of reality. His is a philosophical act, the only one that will matter. Man, that’s scary and heavy all at once.

All in all, Justice League: Crisis on Two Earths is an enjoyable romp back into the animated world of the JLA. Fans of the comics, and the TV series will love it, and there’s even enjoyment for mainstream outsiders as well. Recommended. But of course, the real reason to get this DVD is for the Spectre animated short, which I’ll be reviewing shortly...