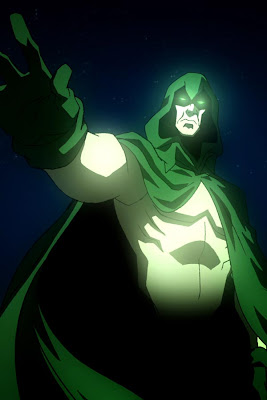 DC Showcase: The Spectre ~ Also on the same DVD as Justice League: Crisis on Two Earths is an animated short featuring one of DC Comics’ oldest, and most violent superhero characters.

Created by Superman co-creator Jerry Siegel, the Spectre is detective Jim Corrigan, murdered and returned to life to become a spirit of vengeance, dispensing justice in twisted, ironic and omnipotent ways. The most notable stories of this character were presented by writer Michael Fleischer and artist Jim Aparo in the Adventure Comics of the mid-1970s. The feature was eventually discontinued, some believe because of the hyper-violence of the protagonist’s punishments – too intense for the times, but in hindsight, some of the best comics of that era.

The Spectre’s first foray into animation here is brilliance! Writer Steve Niles delivers a film noir punch with a horror intensity that not only makes this character accessible to new audiences but also represents all the things about the Spectre that hardcore comics readers love about him. This is the Fleischer/Aparo Spectre brought to animated (after)life.

And serious props go to whoever thought of stripping the animation with lines and crackles to give the effect of an old movie, beautiful touch. This segment was a masterpiece, and well worth the full price of the entire DVD.