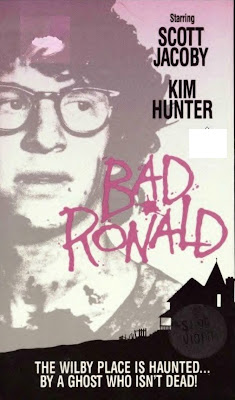 Bad Ronald ~ In the early to mid-1970s ABC did tons of TV movies, also known as telemovies or movies of the week. The best of these were low-budget yet very memorable horror thrillers. Warner Home Video has finally released some of these lost classics on DVD in their Archives Collection.

One of these was Bad Ronald, based on the book by science fiction writer Jack Vance, and starring Scott Jacoby (Mario from The Little Girl who Lives Down the Lane) in the title role and Kim Hunter (Zira from Planet of the Apes) as his mother.

Social misfit Ronald accidentally kills one of his tormentors and his equally twisted smothering mother hides him away in a secret room in their house. When Mom heads to the hospital and dies, Ronald falls deeper into dementia. When a family moves into the newly vacant house, and one of the daughters begins dating the victim’s older brother – it gets really creepy as he starts drilling peepholes in walls and pillaging their fridge for food.

A wannabe writer, Ronald, in his loneliness, begins to blur the line between reality and his fantasy world of Atranta, envisioning the daughter as his princess and the boyfriend as an evil duke. When the parents go away for the weekend, Ronald comes out to play, and things take a wild turn into horror movie land and the fun begins.

The stranger living in the walls idea is a classic of the genre, almost as notorious as ‘the calls are coming from inside the house,’ and Bad Ronald is a classic in its own right. I’m glad this is finally out on DVD.

Email ThisBlogThis!Share to TwitterShare to FacebookShare to Pinterest
Labels: abc, bad ronald, little girl who lives down the lane, planet of the apes, television, warner bros