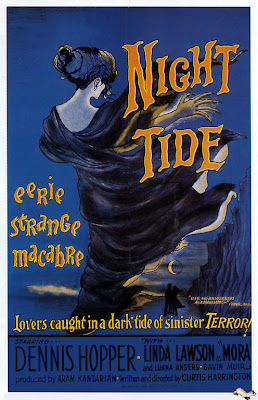 Night Tide ~ This 1961 black and white Dennis Hopper starrer seems to be the pseudo inspiration for Splash, and maybe The Little Mermaid as well - as if they were directed by David Lynch.

Linda Lawson is Mora, the mermaid and Dennis is Johnny, the naïve (and blond!) sailor on shore leave, feeling very much the fish out of water at the local beatnik scene where he meets the girl. A courtship begins and it turns out that Mora dresses as a mermaid at the local beach amusement pier. She's as wacky as he is naïve. It seems that Mora's last two boyfriends washed ashore dead. What is most bizarre is how casual everyone is when they inform Johnny of this fact. The ending is just plain messed up.

The film was written and directed by Curtis Harrington who went on to mediocre fame in the late 1970s with the telemovie Devil Dog: Hound from Hell. Lots of wonderful atmospherics and use of shadows here, obviously Harrington was influenced by Val Lewton, and in turn as I noted above, he might have very well influenced Lynch as well. He does quite a good job here however with the seeming special effects budget of a fry cook.