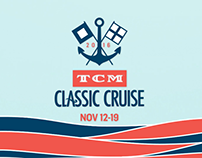 Sadly, it was with bittersweet feelings that The Bride and I attended the 2016 Turner Classic Movies Classic Cruise, as it had been announced earlier in the year that this would be the final cruise. After five previous highly successful cruises of this kind, they were ending the program. The reasons given have been diverse and full of rumor, perhaps attendance or logistics, but suffice it to say, I still had the time of my life. 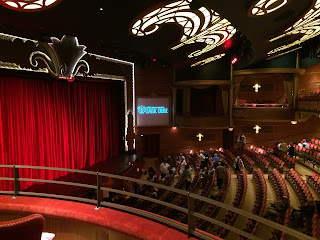 This cruise took place on the Disney Fantasy for seven wonderful days at sea and at ports in the Western Caribbean. While Robert Osborne was unable to attend, other TCM hosts and regulars were there, including Ben Mankiewicz, Illeanna Douglas, new TCM host Tiffany Vazquez, trivia master Alex Trebek, Eddie Muller, Bruce Goldstein, and Randy Haberkamp. Guests included Leslie Caron, Kim Novak, Diane Baker, Michael York, Lucie Arnaz, the fabulous Dick Cavett (why isn't he a TCM host yet?), and joining the ship halfway was Jerry Lewis. Music was supplied by Jennifer Keith, and as always the Hot Sardines. 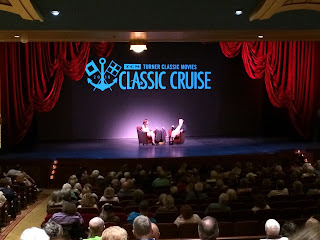 Besides the guests, and more movies than you can shake a film reel at, there were other events, like the Beaux Arts Ball, a theme night designed to bring alive the technicolorful world of An American in Paris. Also taking inspiration from films like Funny Face, Sabrina, and Midnight, the city of lights was brought to life on deck for one night of Parisian delight.

This year's week-long escape was a blast, good to see old friends from previous Cruises, and make new friends too, and I hope TCM will reconsider ending this program. Everyone who has experienced the TCM Classic Cruise absolutely loves it. In the days and weeks to come here at Welcome to Hell, I'll be featuring my reviews from the Cruise, including The Third Man, The Kid Brother, Employees' Entrance, Vertigo, Strait-Jacket, an episode or two of "The Dick Cavett Show," and The Dark Corner, just to name a few. Stay tuned!