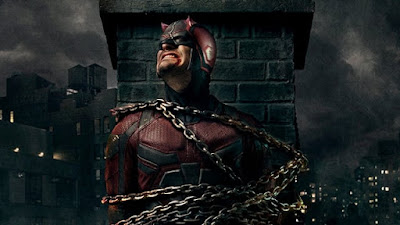 The first episode of "Daredevil" Season Two ended with our hero shot in the head, and the second with his radar sense failing and the Punisher closing in. When the police arrive seconds later, both combatants are gone. So far, the cliffhangers are hot. But where did Daredevil and the Punisher go? Something tells me I don't want to know. 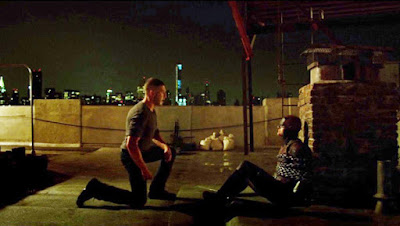 As we open in the pre-credits scene, Matt is hallucinating from his Catholic upbringing, until he slowly awakens in chains on a rooftop with the Punisher. This apparently right from the comics, from Garth Ennis' Punisher #3, but I can't comment much, having never read the issue before, but it's been praised for the philosophical discussion between these two protagonists. Daredevil's compromised position forcing him to engage his foe verbally as opposed to with his fists. 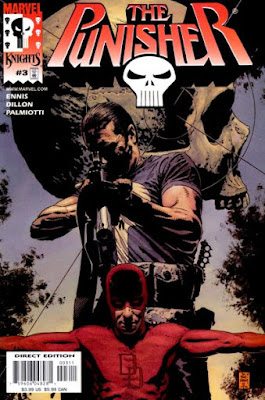 So I dug up the comic in question, and found it to be much what I expected, and worse. Garth Ennis is an extremely talented writer, but with one serious flaw, especially when working in the world of comic books - he hates superheroes. Unlike other comic book writers who hate superheroes, like Frank Miller, Ennis doesn't usually write superheroes, unless they're twisted parodies like The Boys or dark anti-heroes like Preacher, John Constantine, or, the Punisher.

In this dark and dreary world of Ennis' Punisher, no one is happy, as masterfully illustrated by the late Steve Dillon, rest in peace. Punisher lives in a skewed vision of our world where misery reigns, where he is the twisted mirror of heroism, and Daredevil is a clown that must be shown the error of his ways. On the rooftop chains of the comic book source material, the Punisher must remake Daredevil in his own image. If it wasn't so ridiculous, it would be horrifying. 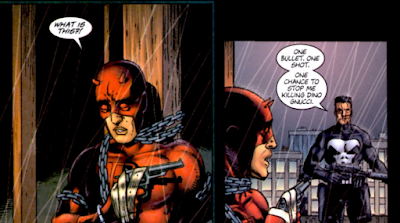 I read comic books for escape from the real world, to see heroism as it should be, to be inspired to be a better person. Superhero comic books are supposed to make you want to be the hero and change the world. Reading Punisher #3 made me depressed, and most of all, it made me hate the Punisher more than I had before I opened that damned miserable comic. I do appreciate the talent and skill it takes to evoke such a reaction from a reader, but trust me, it will be a very long time before I ever read another Punisher comic. 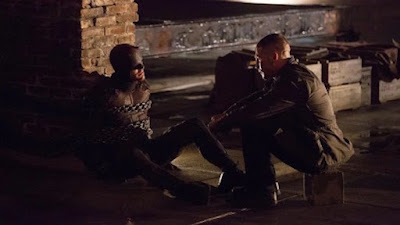 But that was the comic, I hope the Netflix episode that is aping it can do better. Here it is also, as I described, a philosophical discussion between the two protagonists, but a far more sensible one. While the Punisher goes about his business, Daredevil (or Red as he calls him) remains in chains talking the shades of gray in what they do. It's a difficult chat, each exchange like pulling teeth, and even though they vehemently disagree with the other's method, there is a hint of hatred-tinged bromance at work. I get the feeling that under different circumstances Frank and Red could be friends. 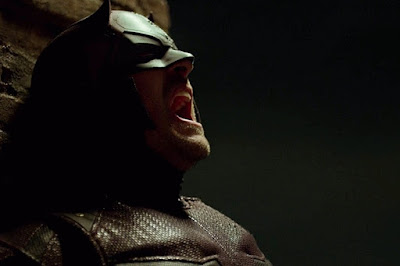 There is some prime acting here, and while Charlie Cox's Daredevil plays a very good counter to Jon Bernthal's Punisher, but the latter is the star here. His performance is spellbinding, saying volumes with an economy of words and gestures. I wasn't impressed when I'd heard Shane from "The Walking Dead" was going to play the Punisher, but he is amazing in the role. The only thing Shane and Frank have in common are we love to hate them both. Serious props.

The bottom line of the debate is killing. Frank will and Red won't. The difference is when Daredevil hits a bad guy they get back up, maybe come back, and when the Punisher hits 'em, they don't. Simple as that. Daredevil's reluctance to kill makes him a "half-measure," a coward who won't finish the job he started. And then it all turns to sh!t, as the ghost of Garth Ennis ruins everything. 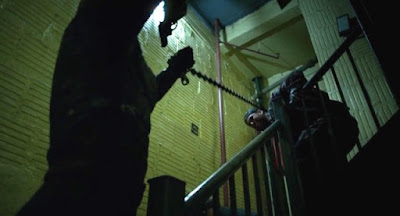 The Punisher duct tapes a gun into Daredevil's hand then produces Grotto, beating the man senseless until he confesses to the murder of an innocent. The terms of this ridiculous trap - Daredevil must 'man up' and kill the Punisher before he kills Grotto, and at this moment is when I really started to hate this show. Where are the Owl, Gladiator, and the Stilt-Man when you need them? I really hate what comics and their related media have become...

In a world where Captain America knows that the Winter Soldier murdered Tony Stark's parents, I guess it shouldn't surprise anyone that Daredevil is too late to save Grotto. The nearly six-minute fight sequence that follows as Daredevil battles his way down several flights of stairs against the Dogs of Hell motorcycle gang with a gun taped to one hand and a chain around the other is phenomenal and spectacular - topping the hallway fight from last season even - but it in no way makes up for how this turn of events made me feel. 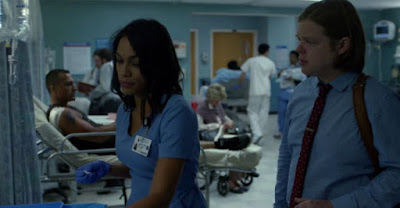 Meanwhile back in the real world, Karen and Foggy bring the only real light and hope to this dismal situation. As Karen fights the very different evil of District Attorney Reyes and learns more about the Punisher's past, Foggy has a heart-to-heart with Night Nurse and breaks up a gang fight in an already insane emergency room. Both are more heroic than the two 'superheroes' we watched for most of the episode.

I always love seeing Rosario Dawson, and Jon Bernthal deserves serious accolades for his performance, and that stairway fight sequence is one of the most amazing I've seen - but I still hated this episode. I may have to take a break before I come back to the second season of "Daredevil." This was rough.