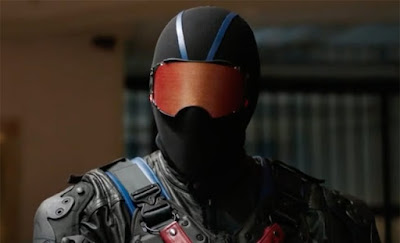 After quite a bit of foreplay, we're finally getting Vigilante, or at least the 1980s Wolfman/Perez version of the character. When we first saw Adrian Chase, we hoped we'd see his anti-superhero identity, and not be red herringed and disappointed like we were with Kate Spencer AKA Manhunter earlier in the series. Now here it is.

We open on a white slavery ring being taken down by Vigilante, though unseen, we see through his infrared goggles. Like the Hood and the Arrow of old, he kills the bad guys, with guns rather than arrows. And he leaves two hanging outside for the police to find in the shape of a V, with Vs cut into their faces as well. If nothing else, this new killer in Star City has a demented sense of style. 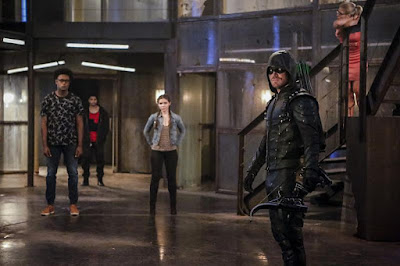 The discussion with Team Arrow is not so much of another killer on the streets, as much as it is - should they stop this one that is killing bad guys? Oliver is adamant that he must be stopped, the others not so sure. After a bank robbery where Vigilante takes out some of the Spooky Crew Team Arrow is still unconvinced. Could Vigilante be a new recruit where Oliver gets outvoted? 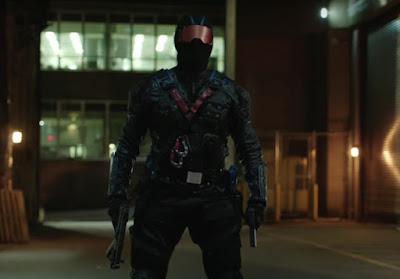 I have to confess some disappointment in Vigilante's outfit. After seeing his comics costume look in that police sketch since the beginning of the season, I expected something slicker, less bulky, and more like the comics than what we've gotten. He's more Wild Dog than Vigilante. If they couldn't pull off the look, why use that sketch to begin with?

The final fight between Green Arrow and Vigilante is better than a lot we've seen lately. Being a Silver Age fan I dig the use of more trick arrows, and we got a few this episode. I did hate that Mr. Terrific got the worst of a beating again, and that we were faked out by the unmasking of Vigilante in the coming attractions. 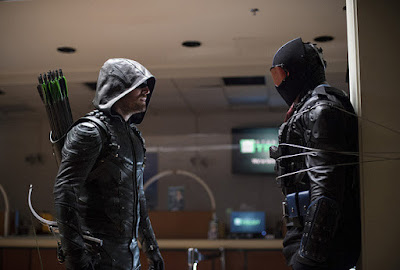 In the soap opera portion of the show, Quentin offers his resignation. When Thea confronts him, he comes clean about his drinking, and his suspicious blackouts, as well as the throwing stars. She takes him to rehab, notably not telling her brother about any of it right away. I guess stubbornness is genetic.

Oliver goes on a date with Susan Williams, the nasty news reporter from channel 52. Many folks might not be aware, but she's also from the comics, a minor character from Green Lantern. She was the reporter wife of Hal Jordan's brother who believed her husband was actually the Green Lantern. On the show, it's hard to tell if she really likes Oliver (although technically it was the Human Target who charmed her) or is leading him on. She does have proof he was in Russia when he was supposed to be on a desert island. 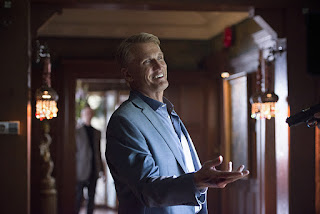 Speaking of Russia, in Flashback Russia, as opposed to Island or Hong Kong, Oliver has a stressful dinner with Konstantin Kovar. Dolph Lundgren shows that he can still be scary after all these years. And after he beats Oliver down, our hero learns the hard truth, that Kovar and Bratva have made a deal. 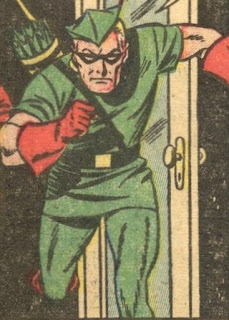 Did anyone else catch the name drop of the Papp Hotel? Nice reference. George Papp was the co-creator of Green Arrow in 1941, along with Mort Weisinger. Papp was responsible for the look and design of the character, and the series artist for years. He also co-created Congo Bill and drew Superboy for a long stretch as well.

The closing stinger was a bit of a shock, but completely believable. We see Artemis meeting with Prometheus. Obviously here, just as in "Young Justice," Artemis is a double agent...