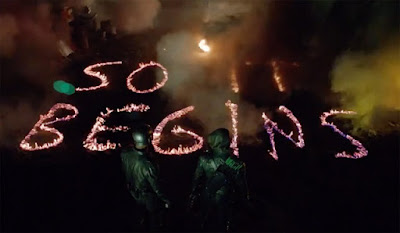 Well, I'll give it an A for effort and dramatic effect, but the opening to this episode, with Green Arrow and Spartan walking into what may be a trap, to get a flaming message that says, "So it begins," left me kinda meh.

I've talked before about how I feel about yet another archer as the big bad when we had a perfectly good big bad in Chad L. Coleman's Tobias Church. Church was new, different, dangerous, smart, charismatic, and we barely got to delve into that interesting Charon obsession of his. He was Negan to "Arrow," and now we have just another archer. 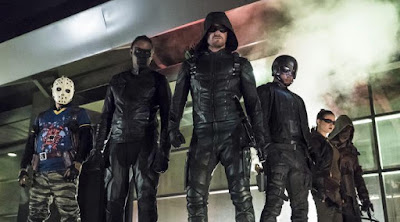 Another problem I have with the opening is that it just has Green Arrow and Spartan, watched over by Overwatch. Oliver didn't want to involve the team because it might be a trap. This is why I didn't want Diggle back quite so soon. With no A team, the B team would be the A team, know what I'm saying? At this point they will always be on the sidelines.

The showrunners seem to be at a loss as to what to do with Quentin and Thea this season. Their subplots seem more like busy work or placeholders than anything else. Or maybe not. The same can be said to some extent regarding Felicity and her cop boyfriend Malone. Keeping secrets from a lover is one thing, but stealing evidence is a whole different arena. When Felicity tells Malone she works for the Green Arrow, he surprisingly takes it well. Knowing this show, that can't be good.

Prometheus seems to be targeting Oliver by killing people whose names are anagrams for people on The List. Is it just me, or should that be a very short list? Anagrams are easy, but to find people in the same city who names are anagrams for each other would seem so specific as to be nearly impossible, right? Those are crazy odds. After much dissent from the team after learning Oliver was effectively a serial killer, they split up to each guard one of Prometheus' six targets. He hits the one Artemis is watching, seemingly teleporting in and bulletproof. And when Green Arrow shows up, he vanishes in a burst of flame. If nothing else, some trust is reestablished with the team. Let's see how long it lasts. 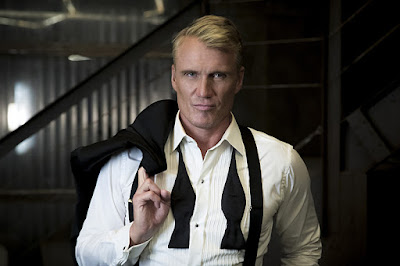 Meanwhile in the past, Konstantin Kovar has declared war on the Bratva. When Oliver's new family strikes back by trying to intervene, Kovar captures Oliver and preaches to him about unity. Konstantin is the father of Leonid Kovar AKA Red Star/Starfire, and played by Ivan Drago himself, Dolph Lundgren. We will see more of him.

The kicker at the end of the episode is that Felicity discovers that Prometheus' weapons are made from Oliver's melted down arrows, meaning he has access to SCPD. We fade on Quentin waking up with a wound and a throwing star. So he is either a split personality caused by alcoholic black outs, or he's being set up. I'm voting for option two. Could it be Malone?  Now that would hurt...