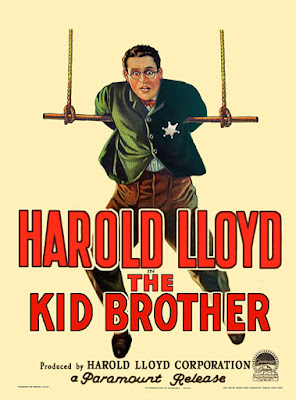 The Kid Brother ~ I hadn't planned on seeing this one on the TCM Classic Cruise. First, much to my shame, I had never heard of this Harold Lloyd silent classic. However, after seeing his granddaughter, film historian and preservist Suzanne Lloyd wonderfully interviewed earlier in the day by Bruce Goldstein, I was primed and ready to see it that night. Unlike Lloyd favorites of mine like Speedy and Safety Last!, this was in a rural setting, rather than urban.

Harold Lloyd plays the puny kid brother in a family of tough cowboys - a sheriff father and two rough and tumble older sons - similar to the Cinderella scenario, and owing much to an earlier Hal Roach production, The White Sheep. When a medicine show comes to town, Harold falls for the daughter of the show, Jobyna Ralston (her last as Lloyd's leading lady), while the other two showmen plot to steal money from Harold's family for the county dam. Hilarity ensues. 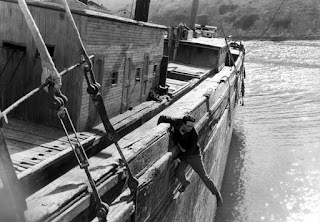 The Kid Brother has a solid coherent plot, and the gags keep you watching. There are no popcorn or bathroom breaks here, do it beforehand. While there are no high heights in these gags and stunts, there are still right up there with the Lloyd standard. This rarely seen and recently restored film, with newer score by Carl Davis, was Lloyd's favorite of his work, and as I recommend you seeking it out and seeing it, it will be a favorite of yours as well.