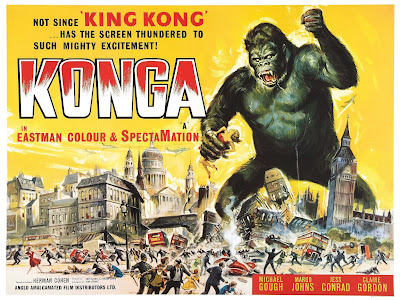 Konga ~ Now I've written a little bit about this movie before over at Biff Bam Pop! as part of my review of the Charlton Comics monsters, all of which were originally from film. Konga as a comic lasted over five years and included art by the amazing Steve Ditko, co-creator of Spider-Man and Doctor Strange, among many others. 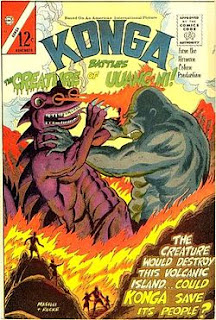 The movie, also tragically known as I Was a Teenage Gorilla, was made in 1961. Konga stars a young Michael Gough, who folks probably know better as Alfred in the 1990s Batman film franchise. He brings a proper English elegance to what is pretty obvious crap, and even manages decorum while stark raving mad. He's good and the movie is bad. Konga is even filmed in "SpectaMation," a made up gimmick to lure folks into theaters. 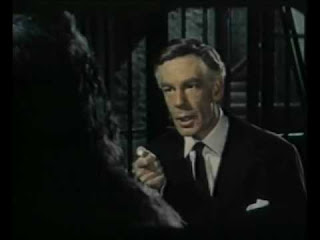 Here's the gist: an explorer brings a baby gorilla and some man-eating plants back from the Ugandan jungle, then goes a little mad. He uses a serum from the plants to grow the chimp, Konga, to man size, then commands him to kill his enemies. Then later, after a super dose of the serum, Konga grows to giant size for some real (and cheap, even by kaiju eiga standards) monster action and rampage in London. 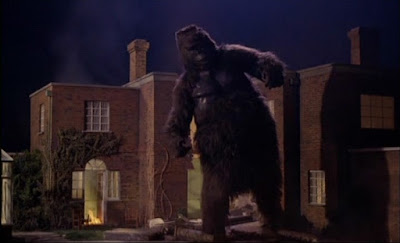 Besides the cheaper than usual effects, there are a couple things that set Konga apart from its Japanese cousins. The English crowds, rather than run from the monster, politely stand and watch. Also when the police are alerted to the presence of a giant monster ape, they immediately believe, and call the war department. That's a far cry from flicks like The Blob and other teenage scifi flicks of the decade previous.

Gough carries the film despite a cast that tries very hard. He remains interesting even while the titular ape takes the screen, something unusual for this genre. The giant monster scenes are sad, due to the ridiculous gorilla suit, but it's worth seeing for Gough. Although watch out for the disturbing cat scene early on. The comics are much better.