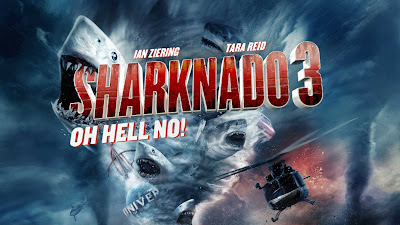 With Sharknado, the third time is the charm, and by now, let's face it, The Asylum is just having fun. After protecting Los Angeles and New York City in Sharknado and Sharknado 2: The Second One, Ian Ziering's Fin Shepherd has to save the entire east coast, from Washington DC (which gets demolished better than it did in either Independence Day or Mars Attacks) to Orlando. Camp silliness rules, and guest stars and product placement are everywhere. Could you expect anything else? Truly, Thunder Levin and The Asylum are laughing all the way to the bank. 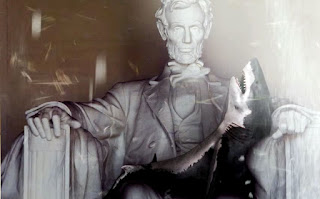 The opening destruction of Washington was just as exciting as the James Bond intro it was trying to emulate. It was funny, thrilling, and ridiculous - and it sets the mood for the rest of this flick. Be warned, despite the inherent silliness, Sharknado 3: Oh Hell No! is remarkably plot heavy. While Tara Reid, Bo Derek, and the rest of Fin's non-acting family tour and promote Universal Orlando - he's making his way there from DC in an armored Shazambago. 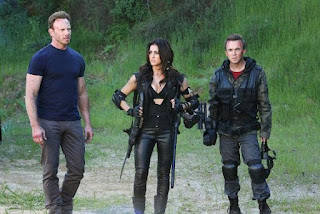 Two of the best things about this flick are the drivers of that Winnebago - Cassie Scerbo as Nova from the first Sharknado and her sidekick Frankie Muniz. I'll take Cassie over Tara any day myself. Also look for cameos by Lou Ferrigno, Ann Coulter, Michael Bolton, Anthony Weiner, Chris Jericho, George R.R. Martin, Penn and Teller, Ne-Yo, and hell yes, even David Hasselhoff.

Like its two predecessors, this flick is a hell of a lot of fun from start to finish, and as it aired last night, plans were finalized for not just Sharknado 4, but this being a regular event. I'm down. And don't forget to vote in the Twitter contest for #AprilLives or #AprilDies... Why does this remind me of Jason Todd? Semper paratus!