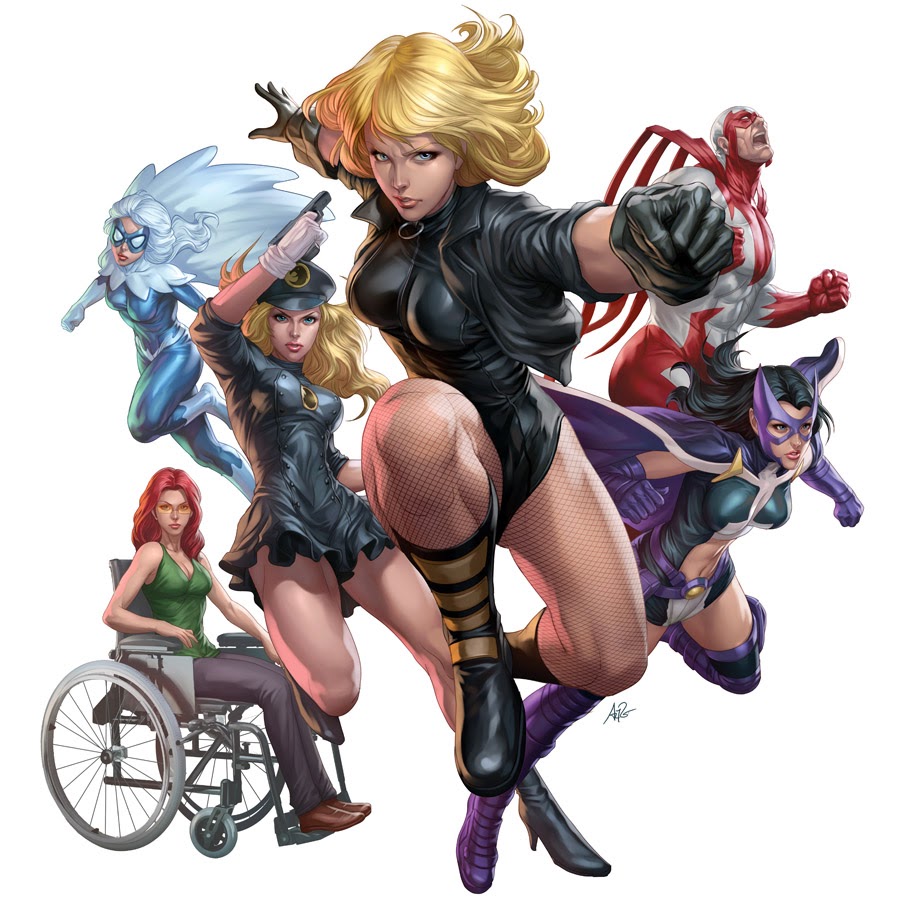 Made famous by comics writer Gail Simone, Birds of Prey was a team-up guest-star title that revolved around the core characters of former Batgirl then Oracle, Black Canary, and the Huntress. During Simone's run it was probably one of the best series of its time. Riding on the success of "Smallville," the CW then the WB was looking for a companion series and developed Birds as a series. 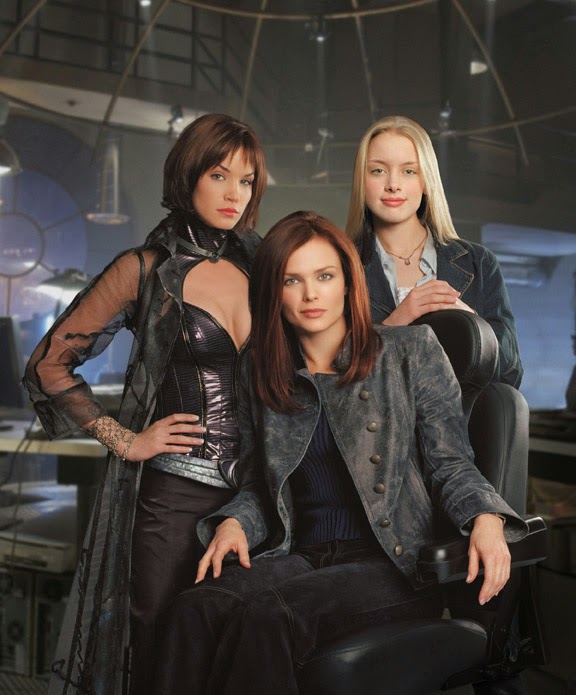 Put bluntly, it was a bit of a disaster. Set in a Gotham City slightly in the future where Batman and Catwoman had produced a daughter, the Huntress, the Joker had put Batgirl in a wheelchair, and Black Canary had a daughter as well. They threw in weird elements from everywhere, and the big bad was Harley Quinn. It could have been good, but it wasn't. You can see my reviews of the series as the episodes were aired here.

Now that "Arrow" has both a Black Canary and a Huntress, I suppose it's time they met. I'm not fond of the "Arrow" version of the Huntress or the actress who plays her, Jessica DeGouw, so up front I am not thrilled by her return. DeGouw is terrific in "Dracula," but her Huntress does nothing for me. I love the Huntress of the comics, but this psycho ex-girlfriend is not her. Honestly I had hoped the Huntress would have returned to help Arrow against Deathstroke… but alas, not to be…

We open this episode with Quentin Lance prepping a police raid to arrest a criminal named Hugo Mannheim. Hmmm... now this is an intriguing possible DC Comics reference. Usually "Arrow" sticks to the Bat side of the DCU, but could Hugo Mannheim be related to Bruno Mannheim of Metropolis' Intergang, an organization funded by Darkseid? Perhaps this is a hint to one of next season's big bads? 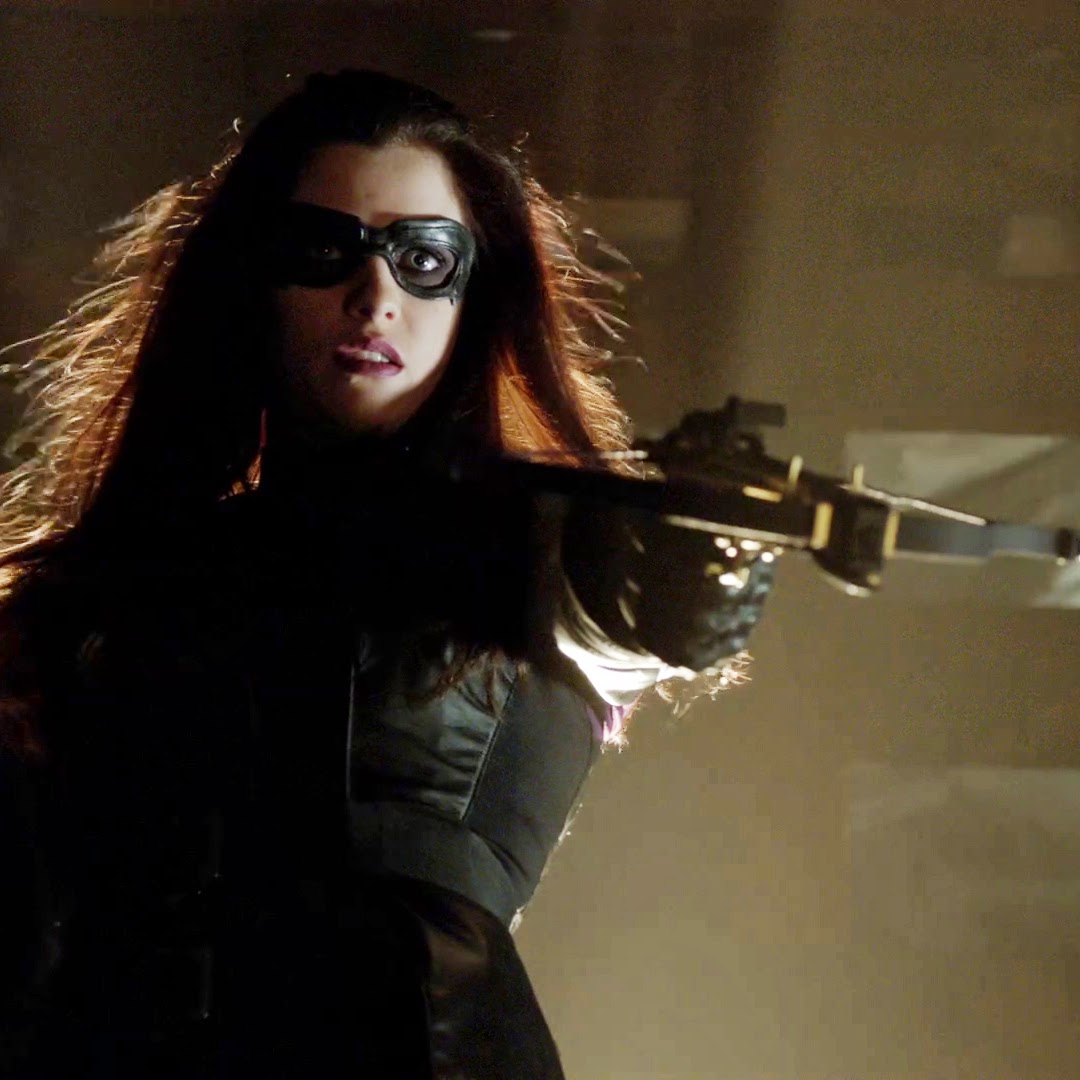 Either way, after some decent Arrow and Canary action, they end up bagging not Mannheim, but surprise surprise, Frank Bertinelli. For those of you don't remember, the Huntress has a bit of a psychotic obsession with vengeance on her father. Yep, Oliver sure can pick them. And it's not just me saying that, the rest of Team Arrow feels the same way. Anyway, with Dad in custody, it's only a matter of time before the Huntress is back in town.

In other news, Laurel is going to AA meetings and Adam has asked her to return to the DA's office, specifically to try Frank Bertinelli. Favors owed under the table took care of any messy disbarment problems. Laurel's been through hell, it's true, but quite honestly with a blonde Lance lady in the Canary costume at Oliver's side and in his bed - I haven't cared. Laurel is almost redundant. If this was a Joss Whedon show she might not be long for this world. 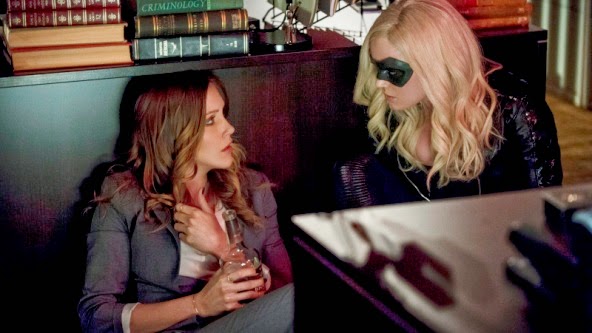 Also, in tracking the Huntress, Roy joins Arrow and Canary in the field. The red hood is nice, but let's face it, he needs a mask, and a codename. Speaking of which, when Arrow feels the Mirakiru boy is about to lose control, he calls him "Speedy," but we learn later he was just trying to remind him of Thea to calm him down. It's a bit lame, but I like it more than the possibility of him taking the name in her memory if she dies.

When Frank Bertinelli is brought in for trial we get a peek at how things are. In the words of Admiral Ackbar, it's a trap. This version of the Huntress is a super-villain, complete with henchmen. They take over the courthouse, and hold Laurel among their hostages. The Canary is also inside, and Oliver is waiting outside for his work clothes. I guess Oliver just can't do that stay in the shadows stealth stuff anymore without his costume, eh? Regarding the inevitable clash between Canary and the Huntress. I was surprised that someone trained by the League of Assassins could be taken advantage of by someone trained by Oliver. Maybe Canary was holding back for Oliver's sake, as she said. They fight it out a bit more satisfactorily later in the episode however. I do wonder where Canary gets these climbing scarves though.

There are some great lines in this episode, like when Roy tries to break up with Thea and she tells him no. Or when Laurel meets Canary and asks if she's one of the good guys and she also tells her no, "but I'm friends with them." Then there's the Huntress commenting upon meeting Canary that Oliver likes to dress up his girls. Felicity is priceless when she talks about how hard it is to tell who knows whose secret identity. Gold. 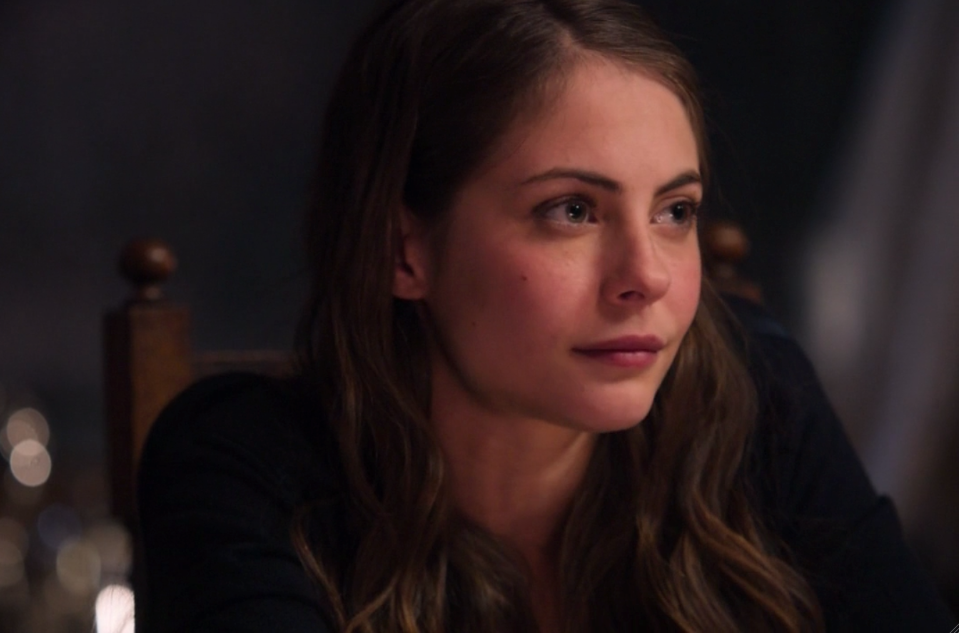 In the various wrap ups, Laurel keeps her job through blackmail, and Adam is fired, although it is nice to see Kate (Manhunter) Spenser again. Roy and Thea are broken up. The cliffhanger stinger has Slade picking up Thea... so maybe the Speedy name is going to stick... for all the wrong reasons...