Deathstroke the Terminator. Since before "Arrow" even started, in the earliest publicity shots that featured only his mask, the ones that made fanboys and fangirls want to watch the show even more than the fact it was a show about Green Arrow, Deathstroke has been here. Introduced several episodes in, and expertly played by Manu Bennett of Starz' "Spartacus," he has been hero, friend, and now villain to Oliver Queen, but who is he really?

In the comics, Slade Wilson, better known as Deathstroke the Terminator, was created in 1980 by Marv Wolfman and George Perez in the second issue of the breakout comics series The New Teen Titans. Granted superhuman strength, agility, endurance, and an enhanced healing factor by government military experiments, Slade Wilson became DC's resident mercenary. He would go on to become that revamped team's most dangerous and persistent foe. 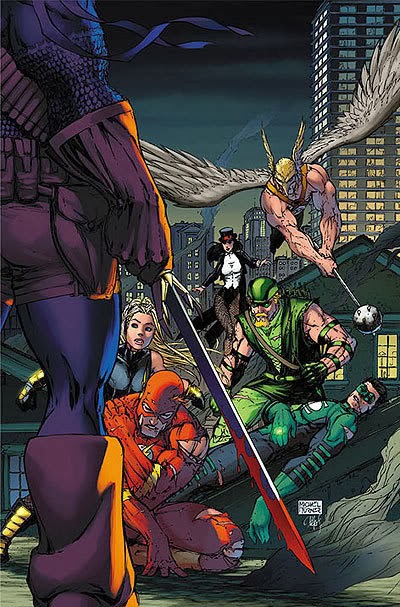 In his frequent battles and schemes against the Titans, he became quite popular with fans. Fan favorite status gained him his own series where he went from villain to anti-hero. Marvel Comics even parodied him with much success as Deadpool. He has been included in many of DC's big events as one of the continuity's major villains.

The biggest turning point for the character may have been during Brad Meltzer's Identity Crisis maxi-series when Deathstroke took down the Justice League singlehandedly. In just a few pages, he did what serious JLA foes like Amazo or Darkseid or the Secret Society had been unable to do for decades. It was also in this comic that the vendetta level feud with Green Arrow began. GA didn't defeat Deathstroke, but he hurt him, and a dangerous grudge began, one that bleeds into "Arrow." 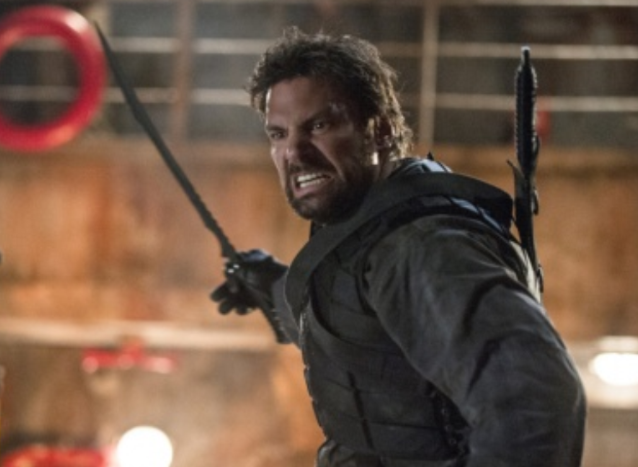 On the show, Slade Wilson is still a mercenary, but one that was stranded on what I've been calling Flashback Island with Oliver, and at times Yao Fei, Shado, and Sara. He taught Oliver to survive and to fight, along with the others. While a romance bloomed between Oliver and Shado, Slade loved her silently from afar. When Ivo captured everyone but Slade, Oliver indirectly caused Ivo to kill Shado. In Flashback Island time, the now superhuman (thanks to Mirakuru) Slade is gunning for Ivo, not knowing Oliver's involvement in her death.

In the present, Oliver has mentioned more than once that no one made it off the island alive except him and Sara. So, surprise surprise when Slade not only turns up alive, controlling Brother Blood and other baddies stalking Starling City, but suddenly in Oliver's own home, supposedly making a donation to his mother's mayoral campaign. And that was our cliffhanger last time. We open seconds later in "The Promise."

The first thing I notice is how touchy feely Slade is with Mom. It's more than a little creepy. His conversation is filled with double meaning as he and Oliver both pretend they haven't met before. Of course predictably, it leads to a flashback, this one with the two as friends planning the attack on Ivo's freighter, the Amazo. We're going to learn what happened finally. The shame is we already kinda know... or do we? One of the best things about "Arrow" is the twists and surprises. 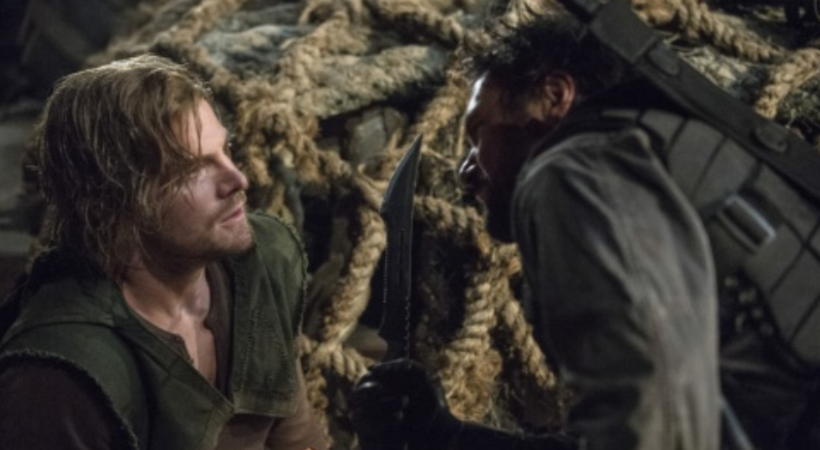 There is one thing I liked that I'm not sure if it was planned, or if the writers were covering their asses. Either way, it was done well and seamlessly. Sara makes Oliver promise that if she doesn't make it, he's to tell her family that she died on the Gambit. Continuity hole filled in nicely.

While Oliver deals with Slade's family visit in the present, he is captured by Ivo on the island, and given truth serum. But like most of their plan of attack, it's all diversion, and it's beautiful watching it come together. Best parts? Oliver in his hood and Slade in his mask. 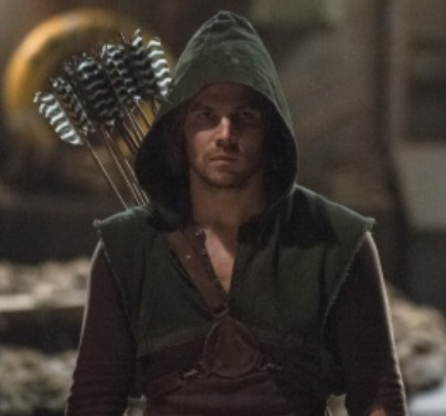 When the moment of truth comes and Oliver confronts Ivo, he breaks down in misdirected guilt and admits he killed Shado, unknowingly in front of Slade. And thus the rift. Slade turns on him. After he kills Ivo, he makes Oliver a promise, matching this episode's title, that he will make him feel complete despair. And that's where we're left in the past - Oliver on the ship now run by Slade, and Sara along with a handful of freed prisoners on the island.

Meanwhile Team Arrow plans an assault on the Queen home to save the family from Slade. Roy shows up, trying outhandshake Slade with his Mirakuru strength, and then Sara. They subtly and threateningly surround him, until Slade says good night. Diggle is outside however waiting to take him out sniper style. Slade knows already and Diggle us disarmed. Slade leaves, swearing to fulfill his promise.

"The Promise" was a fantastic episode, one of the best as friends had been telling me before I'd had a chance to see it. They were right. There are some nagging questions though. Why did Ivo need an eye? What's Slade been doing for five years? Can Moira be more of a bitch? And is that Harley Quinn in the preview for the next episode?? Yeah baby, next: Suicide Squad!