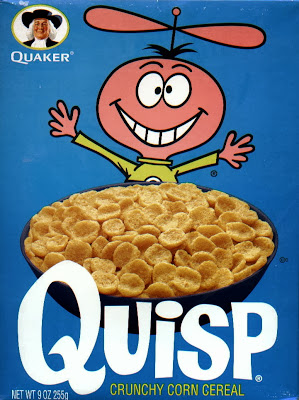 Finally my local Shop-Rite has decided to stock Quisp cereal. This is kinda cool, rather than drive a couple miles away to the Acme, or ordering through the mail, we can get Quisp almost any time we want. For a long time, that wasn't really possible. Quisp was among the missing.

Quisp was my favorite cereal when I was a kid way way back when. Way before Frosted Flakes and Rice Krispies, I loved me some Quisp. The cereal was what I would munch while watching the Saturday morning cartoons and beg for in the supermarket because it had a toy inside. I have a distinct memory of my big sister building the toy flying saucer from inside the box. That's right, a toy so complex it had to be put together. She even attached a thread to it so it would appear to fly on its own.

Yeah, we're talking about real cereal, it's even made mostly of corn and sugar, in the shape of little flying saucers. It even took its name from the little alien who was the cereal's mascot, who was featured in a series of animated commercials during Saturday mornings, by Jay Ward, who also did "Rocky and Bullwinkle." Can you get more retro than that?

On Saturday mornings back in the day, the commercials were a little longer, not thirty-second buy-me blasts, but sometimes multi-minute-to-be-continued-on-a-later-break stories. The ads for the original G.I. Joe Adventure Team were like that, and so were the adventures of Quisp and Quake.

While Quisp was a little alien dude, Quake, his default friend and active rival was a big burly miner (later a superhero-like swashbuckler), and they would argue, fight, and compete over whose cereal was better. Ironically, they tasted the same, but had different shapes, Quisp in the shape of tiny bowl-like flying saucers, and Quake was, I think, big rock-shaped cereal. I really couldn't say, I always got Quisp.


I remember vividly in 1972 when an election took place where you could vote for your favorite of the two cereals. A nation of kids, wrapped up in the same type of election fever that gripped their adult counterparts, voted for Quisp as the chosen one. Quake won. As his punishment, besides dealing with Quisp's gloating, Quake became the sidekick to Simon the Quangeroo, who got his own cereal, albeit an orange flavored version.


When another election, one I don't actually recall, was held in 1976, Quisp won again and Quangeroos were vanquished, ahem, I mean discontinued. The ironic thing is shortly thereafter, all three cereals seemed to vanish from not only television screens, but also store shelves.

Quisp returned in the 1980s briefly and then again in the 1990s as available online only, before coming to select stores. I'm glad it's now available closer to home, and I'm sure we'll be getting it more often.