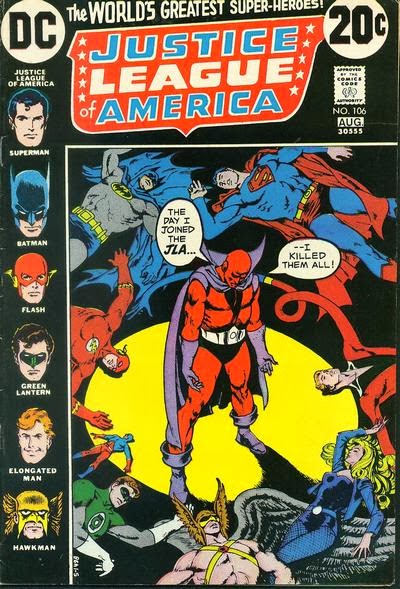 A big chunk of my comics childhood has passed away. Nick Cardy, born Nicolas Viscardi, was perhaps the first influential artist on Aquaman and Teen Titans, but most importantly, he illustrated almost every DC Comics cover in the early 1970s. To me, Nick Cardy's versions of the DC superheroes were the definitive versions, as those were the ones I saw all throughout my childhood, and even on the covers of books I didn't read. And he was damn good. Nick Cardy passed away this weekend.

Here is the official press release from DC Comics:

"We are saddened to learn of the passing of Nick Cardy, one of the industry’s greatest artists. A talented draftsman with a knack for layout and energetic cover design, Cardy’s art leapt off the page and helped redefine some of DC Comics’ most lasting characters for a new age. 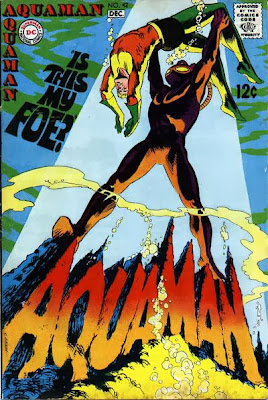 "Like many early comic pros, Cardy began his career working under the tutelage of the legendary Will Eisner, as part of the Eisner and Iger studio. But it was his arrival at DC Comics in 1950 that saw the artist begin to show signs of the legend that would soon form around him.

"Cardy’s smooth line and dynamic sense of action graced the first appearance of the Teen Titans in THE BRAVE AND THE BOLD #60, not to mention almost 40 issues of AQUAMAN during the character’s initial Silver Age solo series.

"Cardy continued his relationship with DC’s teen team for the entirety of TEEN TITANS 43-issue Silver Age run, redefining the collection of sidekicks through his innovative and yet still classical brushstroke, with a dash of post-modernist design and 60s swagger. "Cardy was inducted into the Will Eisner Hall of Fame in 2005.

“We’ve lost one of the artistic pillars here at DC,” said Diane Nelson, President of DC Entertainment. “Nick’s work on Aquaman, Teen Titans and beyond helped define how we look at these characters today. Our thoughts go out to his family, friends and many fans.”

“Nick Cardy was a wonderful artist and person, but I’ll always remember his amazing covers,” said Dan DiDio, DC Entertainment Co-Publisher. “From the classic “Is This My Foe?” AQUAMAN #42 image that featured a victorious Black Manta hoisting Aquaman above him to the first appearance of the Teen Titans, Cardy just knew how to get a reader’s attention – and that is a talent that can never be understated. He was my definitive DC cover artist for the 60s.” 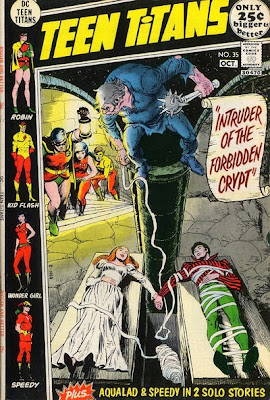 “Nick Cardy’s work helped define some of the things we see in comics today and take for granted,” said Jim Lee, DC Entertainment Co-Publisher. “He broke out of the mold in terms of covers and layout and created a truly interactive experience for the reader that directly points back to his time with the Eisner studio. His versions of Aquaman, the Teen Titans and Bat Lash – to name a few – remain iconic today. Our sympathies go out to his family during this difficult time.”

When I think of the Teen Titans, I think not of Marv Wolfman and George Perez' wonderful New Teen Titans, I think of Nick Cardy's Titans. The heroes of the comic my big sister read, on which I learned to read, the ones that even taught me about Shakespeare, and slavery, and the Civil War, and the civil rights movement. We have lost a comics legend, and I have lost a piece of my childhood.

To see a few more of Nick Cardy's covers, check out my Tumblr here.