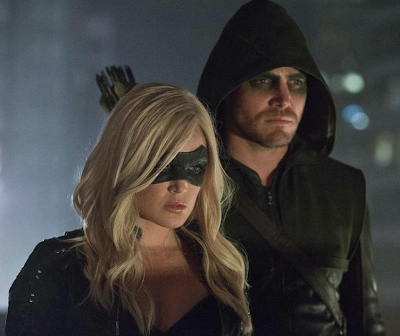 My mantra in the review of last week's episode was Who is the Black Canary? and now we know. For those of you who already know or figured it out on your own, you'll just have to wait a couple paragraphs, and for those who don't, you'll have to sizzle too. I'll get to it. All that said, I enjoy a little mystery surprise, and "Arrow" gave us a nice one to ponder last week.

Our opening has Oliver and Sebastian Blood parrying once again verbally. I know it's leading up to Oliver running for mayor just like in the comics, and I know that Sebastian is Brother Blood, but I'm just not finding this storyline all that exciting. Oh, we might get references to great inspiring dialogue by Denny O'Neil or Elliot S! Maggin about 'what one man can do,' but on the other hand, I highly doubt that Sebastian is going to pull out the prayer shawl of Jesus or call upon Trigon. 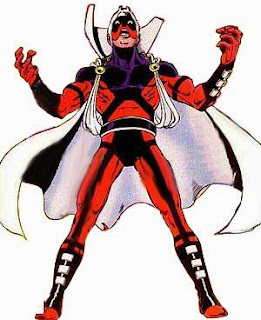 Meanwhile Felicity figures out that the Black Canary (though not yet named so) is following Laurel, not Oliver. Knowing this, our hero ambushes and unmasks her. It's the late Sara Lance, who supposedly died in the shipwreck that stranded Oliver on the island. At least it's a Lance in the leather, oh, and she knows Oliver is The Hood. 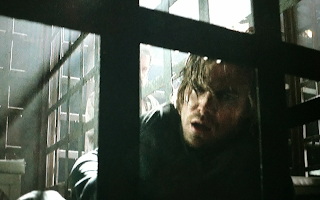 Cue painful memory music, and island flashback, it turns out Oliver knew she wasn't dead. On board the Amazo (the boat, not the one man Justice League), he encounters a Russian man in the next cell - will the Bat-connections never end? - it's the KGBeast. I guess we know where Oliver got the tattoo and Russian mob contacts now. And Sara is there too, but not in the way we expect... 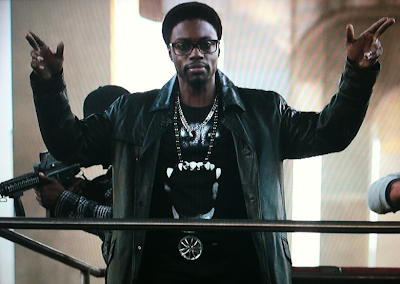 Meanwhile a new villain has arisen from the ashes and wreckage of The Glades, a man who ironically calls himself The Mayor, a merciless sociopath who is carving out a territory and a reputation in the city. He's played by an actor I like a bit named Cle Bennett. The Mayor is running guns in Starling City. It seems like even after The Undertaking, Starling City is getting its groove back.

Diggle meets with Lyla of A.R.G.U.S. again regarding Deadshot. Summer Glau continues not to impress. I love her, but I just don't find her believable in this role. I just don't buy it. Laurel is drinking a bit and gets stopped by the cops. It seems that being demoted to beat cop has humbled Quentin Lance as he's now trying to make amends with The Hood and Oliver both. I have the feeling this is an interim episode, just moving the pieces around the board for the big strike. 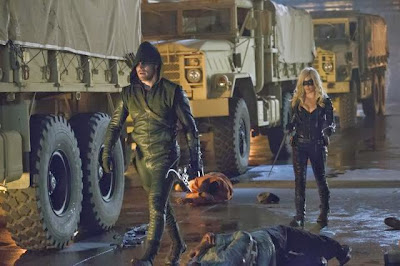 After a heart to heart chat between Oliver and Blood that invokes the title of the episode, The Mayor attacks a Cash for Guns rally. Our hero saves Blood, but Sin is caught in the crossfire. As you might imagine, this launches both our ersatz Green Arrow and Black Canary at the same target. Yeah, fangasm, baby. Best parts of the clash are tied, when the two trade weapons, and when The Hood deflects a rocket with an arrow. 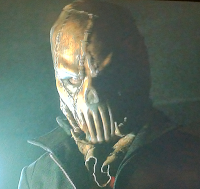 In the odds and ends department, we had a Jack Kirby shout out, as Marvel's King Kirby did a brief but brilliant stint on Green Arrow in the 1950s. On the bad side, I cringed at the continuity of Black Canary having black eye make up when her mask is on, yet it disappears when the mask comes off. Uncool.

In the end, we see The Mayor bound, but not by the police. He's needle injected with some sort of drug by a man in a weird mask. Remember what I said about the ability of this show to surprise? Yeah, baby, Brother Blood is here, and is that venom?

Next: The League of Assassins!