I jumped right from "Jessica Jones" into the second season of "Daredevil," so I was already not happy, and what I knew about season two from interviews at Biff Bam Pop! here and here, before I even watched it, made me less happy.

I am not a fan of the Punisher in any way. He is not a hero, he is a villain, and the folks who cheer him as the former irk me no end. And while I respect the storytelling, I'm not a Frank Miller Daredevil fan, and I couldn't care less about Elektra. That the second season would be focused on these two characters ticked me off, more because I wanted Gladiator and Stilt-Man, who had Easter eggs and hints in the first season, than because I'd already seen multiple cinematic versions of Elektra and the Punisher, and had been left unimpressed. Nevertheless bring it on. I liked Daredevil, I wanted more of him. 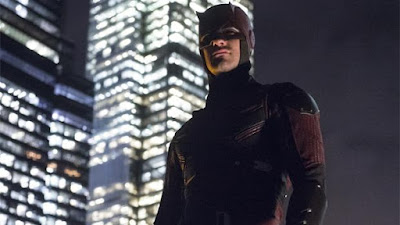 As we open on a diamond heist, I get more of him. In pursuit of ruthless thieves through the streets of Hell's Kitchen, largely unseen or off-camera, Daredevil picks them off one by one. As they're collected by the cops, our hero stands on a rooftop and allows just the slightest smile. Yeah, I want more of him. But I'm afraid that the two guest-stars, Elektra and the Punisher will overshadow him. I got my fingers crossed.

With Daredevil covered, next we renew our acquaintance with the Matt Murdock and Foggy Nelson friendship/partnership. It seems to have survived the first season well, and the two actors Charlie Cox and Elden Henson still have great chemistry. As they walk to work, the conversation veers in and out of Foggy's dating exploits and Matt's night work seamlessly. 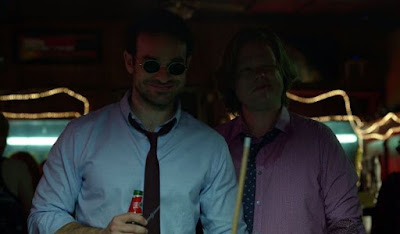 Because of the events of the first season, business is booming for Nelson and Murdock, Deborah Ann Woll's Karen Page has her capable hands full. The problem is that they're broke, they may be genuinely helping people but the fact is you can't run a law firm on fruit, pastries, and good intentions.

We switch scenes to focus on the Irish mob in Hell's Kitchen. The man Nesbitt is a Garth Ennis creation from his Punisher comics, and let that set the tone for this season. It's not Daredevil and Punisher, it is specifically Frank Miller's Daredevil and Garth Ennis' Punisher. I am not looking forward to this at all. Could I just have season two of "Jessica Jones" now please? I'm sure it will hurt less...

Like Nesbitt, Grotto is also from the comics, but more in line with street thugs and rent-a-henchmen like Turk. Here, he's tending bar at a meeting of the Irish mob. Nesbitt is talking big and making plans. Now with the Kingpin, the Russians, and the Chinese out of the way - thanks to 'the Devil,' the Irish can take back Hell's Kitchen, after all, historically it was once theirs. Right when Nesbitt is about to end his speech with a bang, he does, literally. 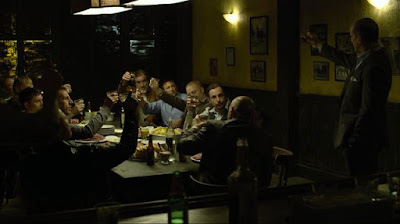 Everyone does. A crazed but precise barrage of bullets spray the room, killing all within, except Grotto, hiding behind the bar. It's a complete massacre, except for poor Grotto. We all know it's the Punisher even though we don't see him. Grotto escapes only to show up at Josie's later, looking for, coincidentally or not, Nelson and Murdock. He wants witness protection immediately. In the middle of telling his tale, he collapses. Grotto was shot after all.

A little investigation, between Officer Brett Mahoney, Turk, and Sagittarius (could this be a possible reference to the criminal organization known as Zodiac?) from the Dogs of Hell (more about them later) yield that a new crew, paramilitary in nature, has come to Hell's Kitchen to fill the void left by Wilson Fisk. Further investigation by Daredevil reveals that it's not a group, but one very well-trained sociopathic individual, one I'm sure we'll find is called the Punisher. 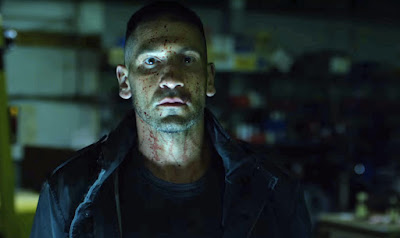 Just like the Purple Man in early episodes of "Jessica Jones," he stays out of frame or in the shadows. That doesn't stop a rooftop battle between Daredevil and this Punisher, one that ends with a bang and our hero falling off the roof. My bet is that DD isn't dead, just a hunch. The show is called "Daredevil" after all.

Despite trepidations, I liked this episode. I like our three leads and their chemistry is intact from the first season. I have not minded the Punisher thus far, although we haven't seen much of him. There were things that I didn't understand like the thugs on the meat hooks (why not just kill them?) and Daredevil yelling when he should be trying to be stealthy, but I can look past those things.

Next: Dogs to a Gunfight!