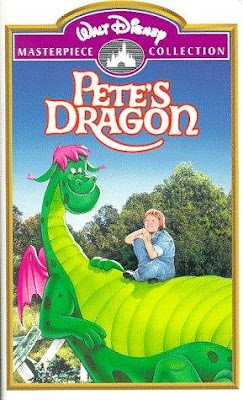 Pete's Dragon ~ Even with my interest in Disney, I doubt I would have seen this one any time soon if it wasn't for the remake in theaters recently. Even when I was a kid, it seemed kinda juvenile and just a bit silly. And that is just based on the images of Elliott the dragon and the television commercials I had seen. As I watch it today it's definitely meant for younger kids.

Based on an unpublished short story, a boy comes to town with his invisible dragon protector while pursued by his evil hillbilly parents. A live action film with only Elliot the dragon animated, presumedly his shadow being state of the art animation for the time, it's no Mary Poppins, despite its trying desperately to be. Elliott is cartoonish, pink and green, and voiced by Charlie Callas, an unfunny comedian best known to me for his silly noises and ruining Sinestro. 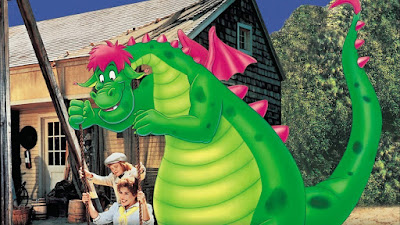 The musical antics feel like they might be better set on a stage than a movie, notably the score as well as one song were nominated for Oscars. Helen Reddy, Mickey Rooney, and especially Shelley Winters are all fun, but seem out of place here. The whole time the movie feels like it's just trying too hard. And I really wanted to like it, I tried, but couldn't get there.

Good for the kids maybe, but not for me.