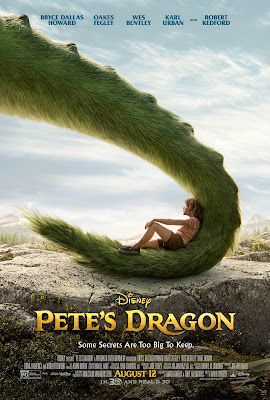 Pete's Dragon ~ We were lucky enough to be on board the Disney Fantasy when this remake of the 1977 Disney classic premiered so we got to see it in the Walt Disney Theater. No matter what the film is, there's really nothing like seeing one in one of those grand old-fashioned theaters of yesteryear.

Whereas the original was a musical lark made for the younger kids, this version is a bit more serious. This non-musical family drama has a boy raised in the woods coming to civilization after several years, and the green-furred dragon who was his guardian and companion while he was away. There is also an ecological subtext here as well but Disney doesn't press it too hard. 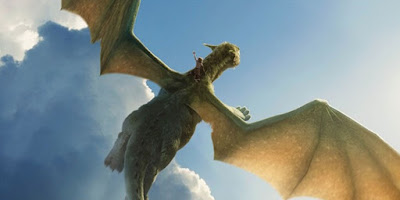 Bryce Dallas Howard, and Karl Urban as the not-so-bad guy, are good, and Robert Redford is fun as the old storyteller patriarch. Elliot the dragon is wonderfully rendered, with the scenery and the visuals the real stars here. That said, I'm not sure I would liked this one as much had I seen it on the small screen. It's a theater movie.

The 2016 version of Pete's Dragon is not just better than the original movie, it's a completely different movie, so really, there isn't a comparison. It's fun, definitely check it out, good for the whole family.