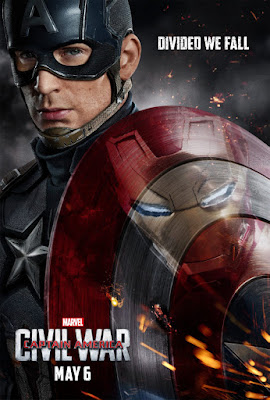 Captain America: Civil War ~ I will say it up front, this is quite possibly the best of the Marvel Cinematic Universe movies so far in my opinion. Marvel's The Avengers, Ant-Man, Guardians of the Galaxy, and Captain America: Winter Soldier all run a tie for a very close second. And it's notable to mention that Ant-Man and Avengers are probably only in that running because of my love for those characters more than the movie itself, but still I would rank them top five easily. But Civil War, thematically an Avengers film and an official sequel in the Captain America franchise is still the best of the dozen or so MCU flicks.

The film is very loosely based on the Mark Millar and Steve McNiven miniseries from Marvel Comics a decade ago called Civil War where Captain America and Iron Man divided the Avengers and the entire American superhero community to go to war with each other over philosophical issues. It was a real war, and lives were lost and destroyed, and one of Marvel's greatest friendships was splintered for many years. 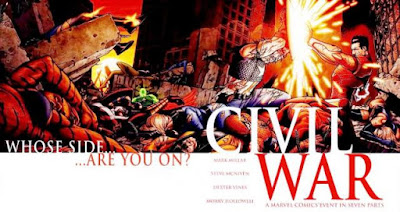 When the town of Stanford CN was destroyed by the super-villain Nitro while in the midst of battling the young and arguably inexperienced superhero group the New Warriors on reality television, legislation raced through Congress to have superheroes declared weapons of mass destruction that must be regulated by the US government, and all such beings should register with said government and reveal their identities. When a similar thing happened in the DC Universe during the McCarthy era, the Justice Society vanished for over a decade leaving the world unprotected. In the Marvel Universe, the reaction was a bit more pro-active.

Captain America led a group of Avengers and other superheroes against the Superhero Registration Act as a violation of civil rights, while Iron Man stood with the government and had a different grouping of heroes at his side. Cap and friends were declared criminals and fugitives, and the two sides literally went to war. Horrors flourished in this war, like Spider-Man's life being destroyed, the Hulk was shot into space, and Goliath was murdered by a mad clone of Thor. In the end, Captain America himself was assassinated. He got better later, because comics.

In any case, Civil War proved very popular and financially solvent for Marvel Comics, so much so that superheroes fighting superheroes became the new trend, and now ten years later Marvel is selling a Civil War II (you can read my reviews of that here), and this movie has been made. Luckily, the Cap vs. Stark theme is the same, but the situation is different in the cinematic version. I don't think I could have taken a true-to-the-source-material translation, as I hated that series, just my opinion. 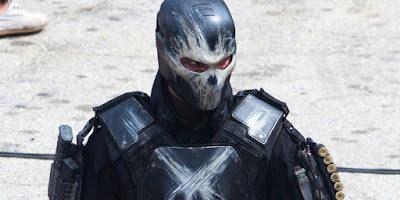 Here in the movie Captain America: Civil War we open on an Avengers mission in Lagos, Nigeria against Crossbones, a metahuman terrorist who clashed briefly with Cap in Winter Soldier, and ironically in the comics murdered him at the close of the Civil War. This is the new team of Avengers formed at the end of Age of Ultron, consisting of Captain America, the Falcon, the Black Widow, and the Scarlet Witch. Crossbones is determined to steal a biological weapon and if necessary blow himself up as long as he takes Captain America with him. In preventing the latter, the inexperienced Scarlet Witch accidentally takes the lives of innocents. 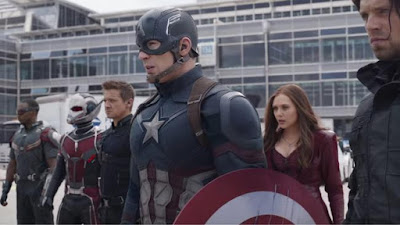 Of course in the world of the Marvel Cinematic Universe, this is only the latest in a string of events that have endangered innocent lives and caused massive property damage. There were also the attacks on New York, Washington, and Sokovia. Different route, but same response, the UN wants to register superheroes as dangerous assets. Captain America is against it, and when it appears that Winter Soldier has been framed for an assassination at the signing of the Sokovia Accords, Cap and his company of non-signers, along with Winter Soldier, are on the run. 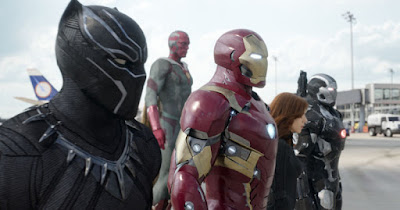 As one would expect, the story builds toward a battle between the two factions, and before that happens, there's recruitment. In the engineered assassination at the Sokovian Accords, the king of Wakanda (a fictional nation first seen in the MCU in Age of Ultron) is murdered and this leads to his son taking not only the crown but also the mantle of the Black Panther. I can't tell you how pleased I am to see one of my favorite Avengers on the big screen, and Chadwick Boseman is an excellent choice to play this fantastic character. He's personally in this for revenge, against Winter Soldier specifically, and sides with Iron Man for the moment. 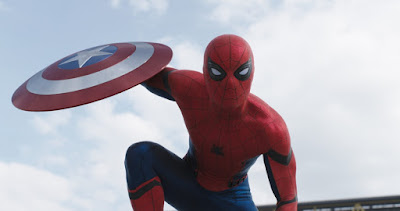 The Falcon recruits Ant-Man for Cap's side, which also made me very happy. On the other side, we have Tony Stark talking up Marisa Tomei's May Parker to get to the very young but very welcomed Spider-Man. Played by Tom Holland with wonder, enthusiasm, and wonderful Silver Age style Spidey banter, this is the character's first foray into the Marvel Cinematic Universe by agreement with Sony, who has not had much success with him. That changes here. The MCU Spider-Man is the best.

And with that, these twelve characters go to war at the Leipzig airport. There's something magical here that also happens in this summer's Star Trek Beyond, all of these heroes get the spotlight. If you have a favorite character, they do not get slighted in this fight, and through all of this dangerous and dynamic dance, you never once doubt that this is a Captain America movie. He is the star, and yet, they all shine. 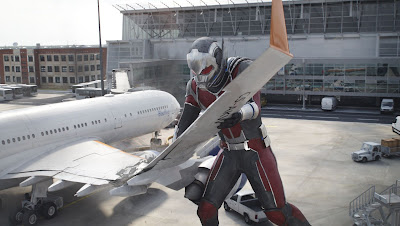 For me though, the best part of the airport battle was Ant-Man becoming Giant-Man. For a Hank Pym fan, seeing any variation of the character make use of that particular power set on the big screen (pun unintended) with special effects that make it look real… man, I was in fanboy heaven. There was no bigger (again) highlight for me. I cheered the first time I saw it happen, and on later viewings it still got me grinning. Bring on Ant-Man and the Wasp… or will they change the title to Giant-Man and the Wasp? 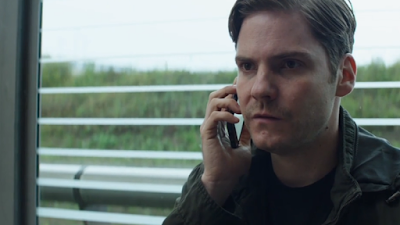 As Captain America and Winter Soldier escape to Siberia with Iron Man and the Black Panther close behind, and the rest of the renegade Avengers imprisoned at The Raft, we begin to learn a bit more about our real villain. This cinematic Helmut Zemo has very little in common with his comics counterpart other than his name and unwavering hatred of Captain America and the Avengers. He is a survivor of Sokovia who lost his family, and has decided rather than destroy the Avengers (better men have tried and failed), he would lure them into destroying themselves.

His plan is to use video footage of the brainwashed Winter Soldier assassinating Tony Stark's parents, and Cap's knowledge of that incident (one small flaw in the plot I don't believe, Cap wouldn't keep it from Tony), would make Iron Man and Captain America tear the group apart from the inside. The end clash between Steve and Tony is heartbreaking. And when you think about it, Zemo won. At the end, there are really no more Avengers. There's a skeleton of a sanctioned team, and the renegades holing up in Wakanda. No real resolution. 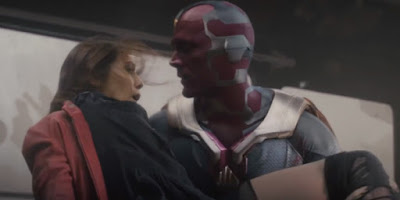 That said, I loved this film, again it's the best of all the Marvel movies so far, and pulled components from all of them (even the Marvel Television Universe) into its story. The airport fight was fantastic, as were the beginnings of the Vision/Scarlet Witch romance from the classic Avengers comics, Tony and Steve and Natasha were perfectly played, newcomers Spider-Man and the Black Panther well represented - wonderful teasers for their upcoming movies, and who didn't dig seeing young Robert Downey Jr. in flashback? 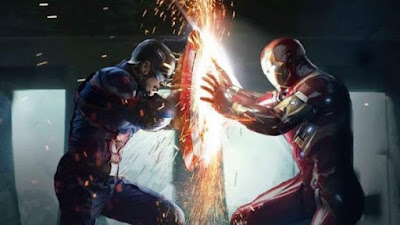 I also loved the callbacks to earlier films like Cap saying "I could do this all day;" General Thunderbolt Ross from The Incredible Hulk as Secretary of State; the funeral of Agent Carter (surely I wasn't the only one to get misty-eyed); and of course Crossbones' vendetta from the second Cap film. All pieces of the big picture that make the Marvel Cinematic Universe great, Captain America: Civil War is an amazing capper to Phase Two. Highly recommended.

And if you'd like more of my thoughts on this film, you can check out this episode of The Make Mine Magic Podcast, or Biff Bam Pop! right here, here, and here.

Posted by Unknown at Wednesday, September 14, 2016