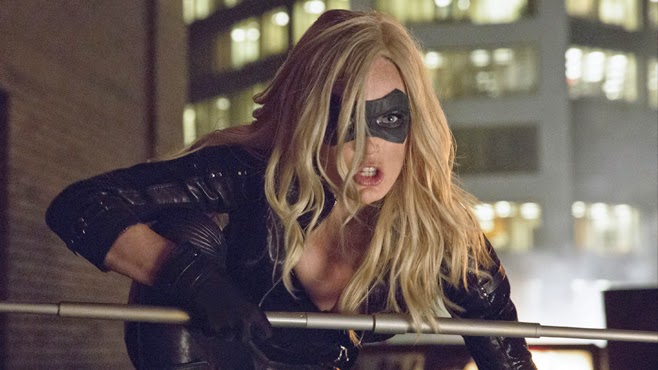 We open just moments after we left off last episode. Our Canary is dead, murdered by three arrows in the chest from an unseen (by the viewers) assailant. Laurel brings her to the Arrowcave.

Who did it? Sara knew her killer, and asked what they were doing there. My guesses are Malcolm or Thea (longshots) or someone from the League of Assassins or even Ras Al Ghul himself. Despite this being a show about Green Arrow, there aren't as many archer suspects as one might think. Huntress? Nah. Oliver himself says there are ten he knows of. My money is on Ras, directly or indirectly. 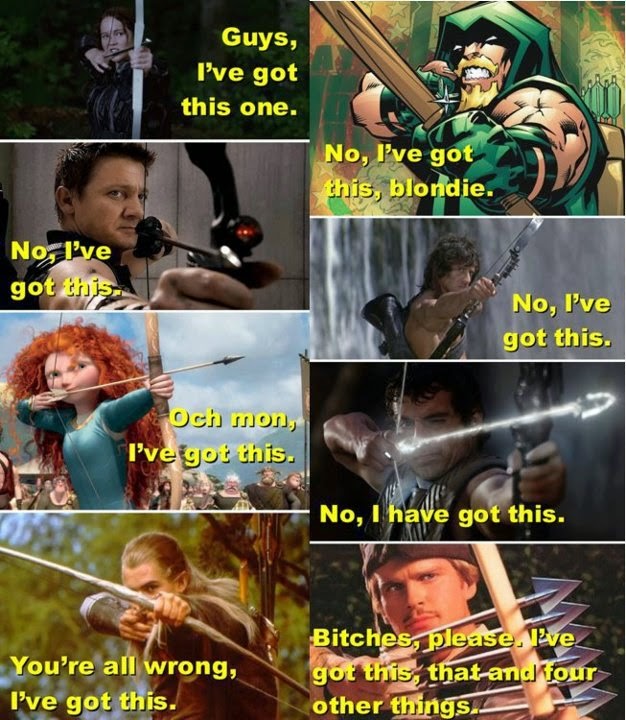 To complicate matters, Lance calls in the Arrow to bring in a new archer in town who's killing people. This was one of the bugaboos of the Golden Age and Silver Age Green Arrow stories. Why does everyone in a costume in Star City seem to want to use a bow and arrows as their weapon of choice? Is there something in the water?

The archer terrorizing the city is one from the comics who goes by the name Komodo. In the comics, Simon Lacroix was a protege of Oliver's father who was obsessed with an 'arrow totem' that supposedly provided enlightenment. He killed Oliver's father for it, and when he didn't find it, became the masked Komodo and vowed to destroy Green Arrow. 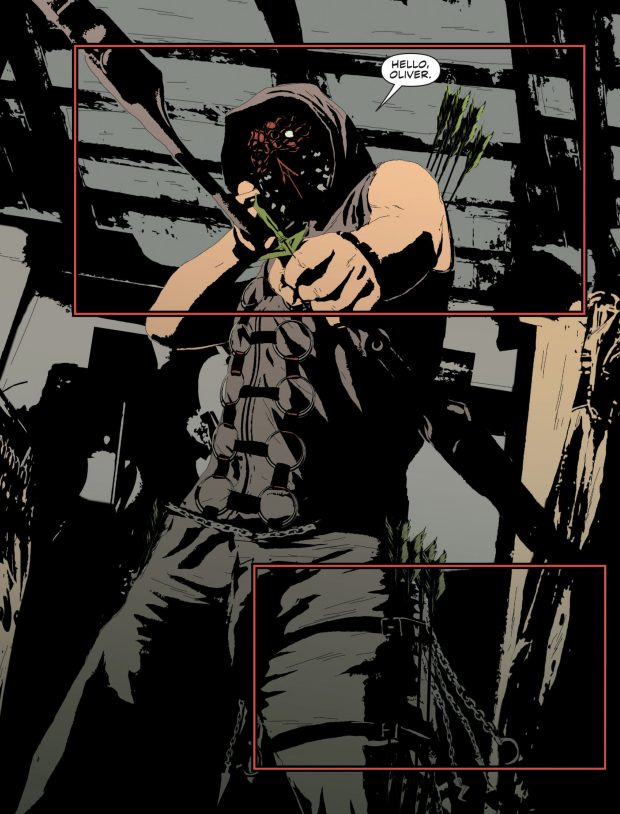 In the show however, Komodo appears to be simply another bow-toting assassin. The motorcycle duel between the archers would have been much cooler had it been lighted better, and we had more than just barely different colored helmets to identify the characters. I mean really, a red helmet could have just as easily been Roy/Speedy/Arsenal, right?

When Komodo crashes Ray Palmer's party, and Arrow and Roy follow suit to stop him, all I could think is what all the party goers must have thought - wow, that's a lot of guys with bows and arrows. And it turns out just like we thought - Komodo is not on the suspect list for Sara's death.

Ray Palmer continues to pursue Felicity on a seriously creepy stalker level. And maybe it's the writing or the behavior, but he is nowhere near as charming or charismatic as he was last week. After Superman Returns and his creepy Ray Palmer here, I think Brandon Routh should try a full-on stalker role, he might be good at it, definitely better than the way he plays heroes. And how is it Ray Palmer us so rich on TV but not in the comics?

Laurel continues her instability from last season, but at least she's not annoying about it this time. She's playing a little rough and crazy, edging her closer to putting on Sara's leather as the new Canary. The fact that Dad doesn't want her taking risks pretty much telegraphs that she will. Of course, things don't always go as we think they do, right? How many of us at the beginning of this ride thought Tommy Merlyn would become Merlyn the Magician? More on Tommy later. 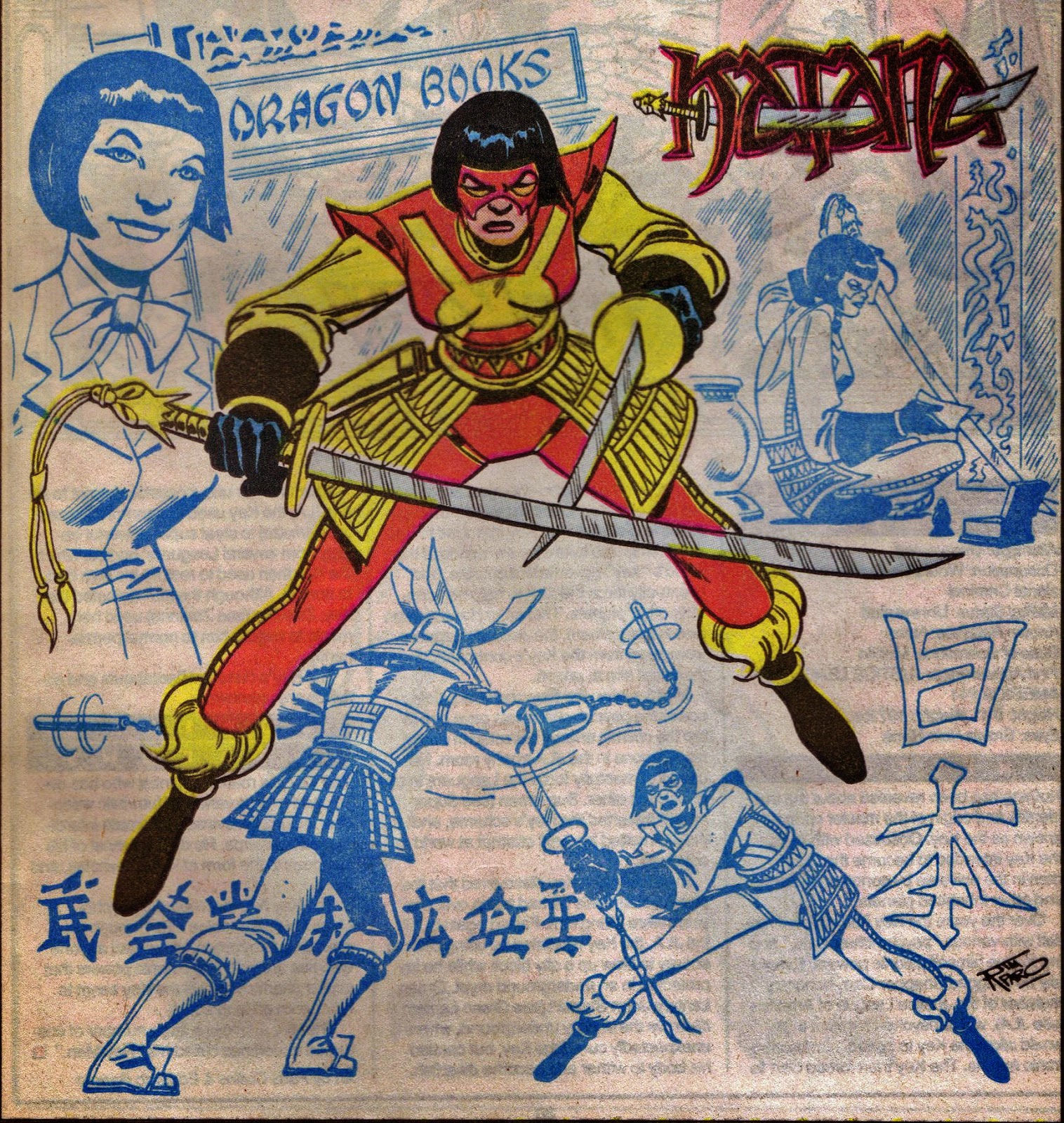 One Easter egg I actually missed last episode was from the flashback sequences. Oliver was being held in Hong Kong by an Asian man, who in turn was being made to follow the orders of Amanda Waller. She threatened his family if he didn't, and his family? The little girl who in the comics grows up to become the Outsider known as Katana.

Speaking of flashbacks, surprisingly, Tommy Merlyn has come to Hong Kong looking for Oliver, lured by the aborted email last week. Just like "The Sopranos," just because a character is dead doesn't mean they are off the show. Way to go, Colin Donnell. Not much of a return, but still worth seeing him.

Namedrops this episode include Qurac, Amazons, Bludhaven, and Corto Maltese where we see Malcolm training Thea. Sara's death and Oliver's refusal to mourn deepens the gorge between him and Felicity. Roy suspects Thea isn't where she says she is. Without Oliver's mom, the soap opera has lessened, but it hasn't disappeared. And was anyone else creeped out that Team Arrow buried Sara for real in her fake grave??