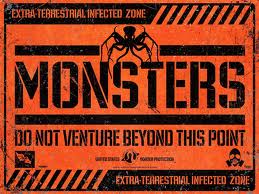 Monsters ~ When I saw this line of hype in the description of this flick OnDemand, I was intrigued. It read, "Best giant monster movie I've seen in years." I was sold. It's written and directed by Gareth Edwards, who has been chosen to helm the new American Godzilla movie - so I definitely had to see it.

The story - six years ago a space probe sent to search for alien life crash lands over Mexico. It brought 'creatures' and the area was walled off as the "Infected Zone." Expecting District 9 meets Cloverfield meets Toho's Monster Island, I happily order it, no matter how high the price.

A magazine photographer is sent to collect the boss' daughter from Mexico in the Infected Zone. After losing their passports, they have to walk. Yeah, what's that writing rule about what's the worst that can happen? Yeah, that's what happens. They walk home through the Infected Zone. 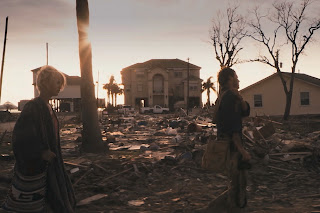 The two main characters are thankfully not typical horror movie stereotypes, but we get to know them as well as we would such characters - very peripherally. They are still placeholders in the storytelling process, but just different ones. The male lead reminds a lot of a young Adam Baldwin, but that's neither here nor there. Some of the dialogue is painful, especially most of it falls into the "What are you doing?" and "Where are all the people?" territory.

The cardboardness and predictability of the two leads is what makes the ending so unfulfilling when it comes. I wanted a monster movie with a human story as a backdrop like most traditional kaiju eiga and got was a bad human story with monsters as the backdrop. At least the monsters got one pretty intense love scene. And no, I'm not kidding.

The monsters are rarely seen clearly early on, just in fuzzy pictures and staticky news footage, and later we hear them, but when they do finally show up... hello, pretty scary. They are sorta giant squid meets preying mantis meets Martian war machine with just a bit of Cthulhu thrown into the mix for good measure. The wreckage and destroyed buildings are stunning, as they are not CGI in the traditional sense, but greenscreened in - they are real destroyed buildings from earthquakes, fires, etc., so it looks, and is, very real.

There is not as much commentary on the current US/Mexico immigration problem as one might think from the summary of this flick, but it's in there. There's not much, but then again, no one ever says the word 'apartheid' in District 9 either and that's like a brick to the head.

This was a fairly entertaining movie though, for what it is, a little long and I would have loved more monster stuff - but all in all, Monsters did not live up to the hype. Regarding Gareth Edwards' future with the American Godzilla franchise, I really am at a loss as to what to think. It may well be visually stunning, but I worry about the story... and the love scenes...