The Ballad of the Batmobile 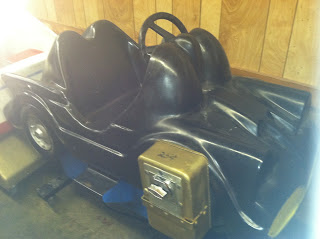 A recent trip to the Berlin Farmers Market (that's the Berlin Auction for all of us who actually grew up in the area) brought on a scary flashback for me. I saw a kiddie ride there, a battered, dusty, broken down kiddie ride still bearing a 25¢ per ride sign. It was the Batmobile. It was the Batmobile from the old 1966 "Batman" TV series, albeit in a scrunched up miniature form, and built for little kids to get inside and ride for a couple minutes on a quarter.

This particular ride may not have been the very one that sat just inside the old Acme Market on the White Horse Pike in Berlin back in the late 1960s, but it might have been. I remember that ride very well even though I never got the chance to actually ride it. I know I begged to ride it, I know I cried to ride it, I'm pretty I misbehaved my butt off to ride it. I wanted to ride the Batmobile sooo bad. And quite frankly, I still do to some extent. 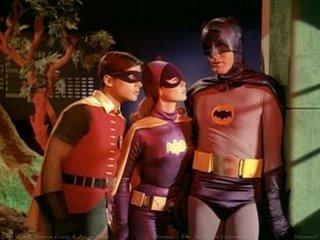 This mania to ride the Batmobile was brought on by the TV series, which during its time was the biggest thing going on in pop culture of the day - and for a generation of young folks, it was everything. It was for me. The "Batman" TV series starring Adam West and Burt Ward certainly was everything for me, and it ignited this obsession I still have for comic books.

Batman and Bat-paraphernalia was everywhere, especially in my house. I had a picture of Batman, Batman slippers, and of course dozens of comics. Every Matchbox and Hot Wheels car I had was imagined to be the Batmobile at one time or another, I would use baggie ties to put little capes on army men, and who didn't tie a towel around their neck and pretend to actually be Batman?

As I stood and looked at this ancient relic of a bygone age, this Batmobile ride, I thought of all these things and smiled. I knew it didn't work any more, but I did wish for a quarter, and I did wish I could ride in the Batmobile. I never did, on this model, but I think we all know, the Batmobiles of our imaginations and memories are much much cooler.