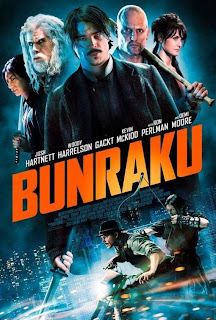 Bunraku ~ I saw this a few days back and I'm still not sure what I thought of it. It's hard to describe. The word that is the title is Japanese and refers to a 400 year old type of theater that makes use of puppets, shadows and origami. It does in fact describe the way this movie is filmed. If I had to give it a shot, I would call Bunraku a samurai gangster western musical morality play. It is shot mostly on a soundstage and many of the sets and miniatures are paper. If nothing else, it's impressive.

The story of a cowboy without a gun and a samurai without a sword who face off against an evil warlord and his gang of assassins takes place in a future where there are no guns, and the world has returned to the way of the sword. Josh Hartnett does his best Tim Olyphant impression from "Deadwood" as the cowboy, with Demi Moore making brief appearances as a madam, and Woody Harrelson plays a wounded hero turned bartender with a penchant for making pop-up books with forgotten (or perhaps stolen) comic book themes. Ron Perlman is the evil warlord, and Kevin McKidd (from two of my favorite shows that never should have been canceled - "Rome" and "Journeyman") deftly dances through and steals the entire movie from the rest of the cast as the lead assassin, Killer Number Two. 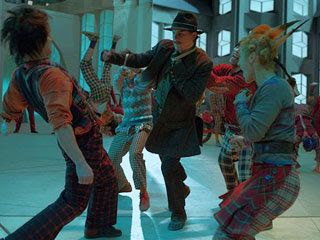 In closing, Bunraku is at its core a morality play, and a samurai film in the old tradition. It's also very stylish and has to be seen to be believed. I recommend it with a precaution. Be prepared to be weirded out, and blown away.