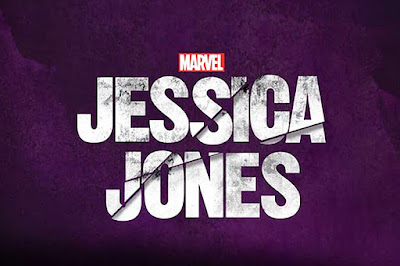 We pick up scant moments after the last episode, when Luke Cage blew up his bar with himself in it, as per the Purple Man's commands, made sure Jessica Jones saw it. He is of course unhurt, but his bar is toast. As I wondered if he had insurance and what an insurance investigator might make of his story, we dove into flashback - Kilgrave has been busy during the episode where he was missing. 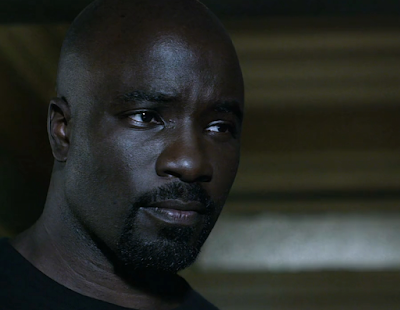 When he left the hanging restaurant with his father, he ran right into Luke Cage, who had been following Jess in hopes of running into Kilgrave. Best line, and our title reference comes when Kilgrave asks Luke what he wants. His reply is to kill him, and Kilgrave's sharp comeback - "Take a bloody number." Then he commands Luke into the getaway car for clarification and interrogation.

The second best line is when Jess brings Luke back to her office/apartment and tells him to mind the mess from the fight with Nuke. Luke asks if he needs to know what happened there, she simply replies, "I guess we're both lousy renters," to which both Luke and I said in unison, "at least it's not on fire." Five minutes in, this one's not so bad so far. I'm smiling.

Of course now that Luke is at her side and Jessica has sworn to kill the Purple Man, there's some creative stalling. Trish is still paranoid about Simpson, asks around and finds the program is a made-up organization called IGH, with initials that apparently stand for nothing. I wonder though, could that H stand for Hydra? 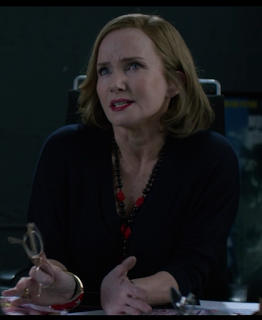 Despite Jessica's warning, Trish's mom comes to visit her estranged daughter in the hospital. What a harpy. Good thing Jess doesn't know. As she joked with Trish earlier regarding Simpson, Jess can only fight one big bad at a time. I guess Nuke and the harpy will have to take a bloody number.

There's mention made of Hammond Labs as being the place where Hope's fetus was sent. This could be a number of different references. There's a Hammond Labs where Speedball, later Penance, got his powers; or it could be a reference to Camp Hammond, a Marvel Civil War era training facility for superhumans; or simply a nod to the original android Human Torch. 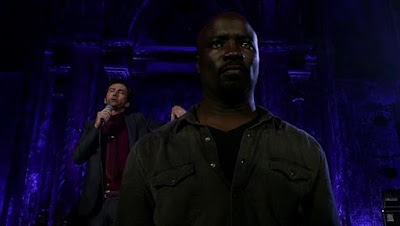 The writing is much better in this episode, elevating it above previous ones. I'm not surprised to see the name Hilly Hicks, Jr. on the script. The playwright and screenwriter is also responsible for the excellent "AKA 99 Friends" earlier in the season. Perhaps he can be convinced to write more when the second season of "Jessica Jones" rolls around.

More clues about IGH come from a surprising source. When Trish's mom comes to visit her daughter at home, again against Jessica's wishes, she brings her a folder marked IGH. It contains Jessica's medical records from the accident that killed her parents and brother. IGH paid her bills. But I guess that's a mystery for another day. 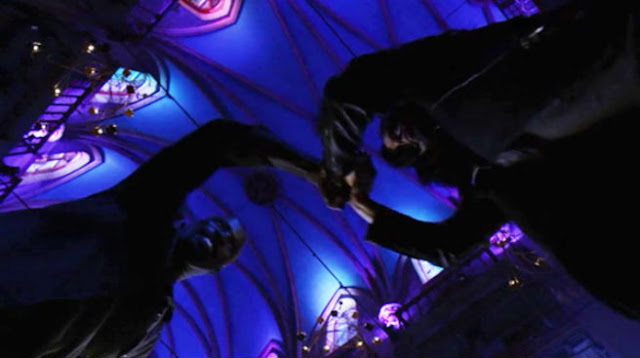 The main event is the showdown in a blue-hued theater between the Purple Man and Jessica - and Kilgrave's proxy is Luke Cage. The whole episode, as their chemistry blended and he played sidekick, Luke was in Kilgrave's power, a puppet working her like a dummy. And now they dance. It's a fight we didn't know we wanted, and it's awesome.

It's a fight that can only be stopped by a shotgun blast to the face. Is the "Luke Cage" Netflix series canceled now? To be continued…