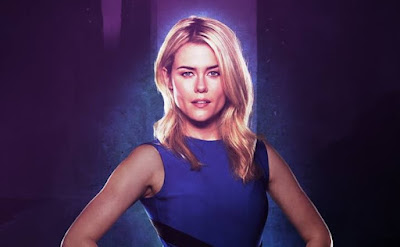 Almost as if the showrunners knew I had given up on the show, they open this episode with something to grab my attention. As they've been doing for most of the series, they dangle Patsy Walker in front of us as bait. I doubt we're going to get Hellcat, at least not yet (I still hold out hope for "The Defenders"), but they have given us Patsy.

The flashback begins with young Jessica waking up in the hospital after the accident that killed her family. Patsy is there in her red wig and her mother. We even get a bit of the "It's Patsy" TV theme song. It actually has a bit of the Josie and the Pussycats movie vibe to it. Any chance of that showing up on iTunes? No? Too bad, I know I'd buy it. It's only a it though, and then it's back to the same old dreary "Jessica Jones" business. 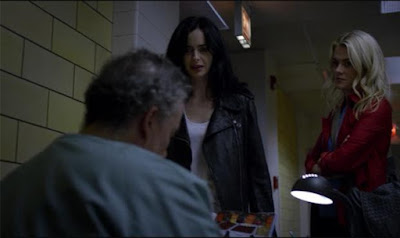 Searching through morgues looking for Kilgrave's father, Jessica discovers something else - Clemons, murdered by Simpson. Not only has Nuke gone rogue from Kozlov and 'the program,' he's on his drugs and looking for both Jessica and Kilgrave. He's gonna hit them like a, well, like a nuke.

Along the way, Jessica, working on no sleep, gets hit by a truck. There are good moments with Malcolm and Trish. Like Flashback Island on "Arrow," we get short but intriguing vignettes of Patsy and Jess as kids, informing the relationship. It's like watching an alliance be formed, explaining the strength of the current friendship. 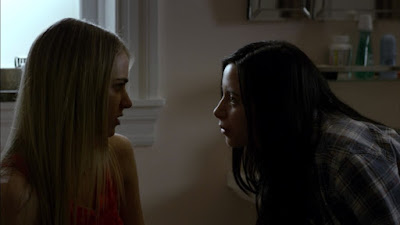 Then Nuke attacks. He's powered by his combat enhancers and Jess is battered by her accident, so they are almost a match. He believes that she's lying, and that she's been protecting Kilgrave from the start. The fight is no hallway fight like in "Daredevil," but it's probably the best we've seen so far in this series. 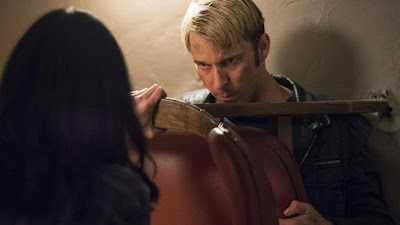 But it gets even better when Trish shows up to 'save the day.' As ridiculous as that sounds, she does. Trish takes one of Will's reds and evens the odds. Between her fighting like a 'hellcat,' and Jess helping, they take down Nuke. Trish nearly loses her life by -I kid you not- forgetting to breathe, it works out and is one of the highlights of the episode. 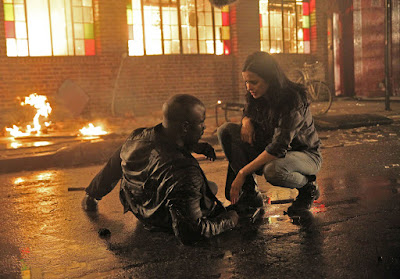 The end of this one is a bit puzzling. Kozlov and other 'boys from the program' retrieve Simpson, so he's not out of play yet. And Jessica gets a text from 'unknown' saying they ran into her boyfriend. Jess immediately rushed to the bar in time to see it blow up and Luke Cage, aflame, stagger out. Cue credits.

Kilgrave is on everyone's minds and lips this episode but he does not appear, which is refreshing. I liked all the young Jess and young Patsy bits. And of course I loved my sadly non-costumed Hellcat moments. This was better than previous episodes, let's see if they're on a streak...

Next: Take a Bloody Number