The Spell ~ Like The Initiation of Sarah, this 1977 NBC movie of the week was meant to take advantage of the success of Stephen King's Carrie. This time in the bullied school girl with secret telekinetic powers role is Susan Myers as Rita. She was best known, and perhaps known only, as Marlene, the mousy platonic friend of Lance Kerwin on the much-missed and sadly brief "James at 15." She kinda vanished after that. 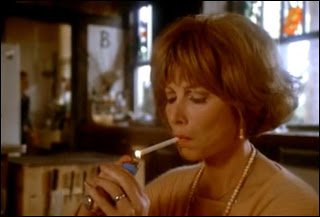 There's also Lee Grant as the mom doing some of her best underacting, and very young Helen Hunt as Rita's more loved kid sister. Rita is put upon by her parents for being both insubordinate and overweight. She's also, unlike Carrie and Sarah, quite unsympathetic. So instead of rooting for the underdog, we're kinda left waiting for Rita to get her comeuppance. That's not how these kind of movies are supposed to work. 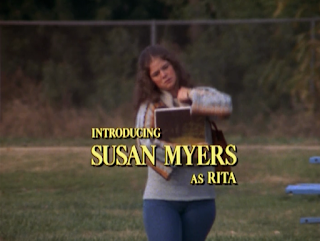 The story doesn't make much sense if you think about it too much, with the supernatural aspects thrown in like a random kitchen sink. The 1970s score slips into weird electronics occasionally, and the movie is filmed in a house that makes one think more of interior design than anything else going on in the flick.

Unlike a lot of the 1970s telemovie horrors I remember as a kid, The Spell does not hold up at all. It's best remembered half asleep late night on my bedroom black and white TV. Not recommended.