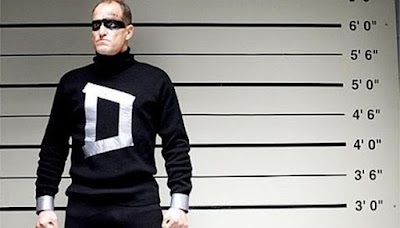 Defendor ~ Insomnia does crazy things to you sometimes, besides keeping you from sleeping of course. With me, it makes me methodically peruse the OnDemand menus. One such search brought me to Defendor.

Now other than "True Detective" and some scenes in Zombieland, I have never been able to stand Woody Harrelson, and yet here I am watching him playing superhero. Of course, the Woody factor (as well as the comedy factor, dark or not) is kinda outweighed by it being in the broadest sense a superhero movie, and also starring Sandra Oh and Kat Dennings, both serious movie crushes for me. 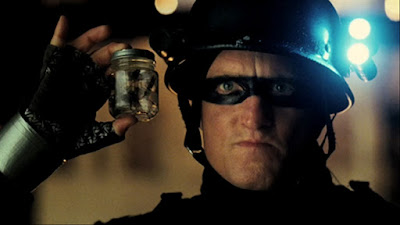 Harrelson plays a functionally special needs man who takes to the streets to dish out vigilante justice as Defendor. Sandra Oh is the doctor examining him as he tells the tale of the film in flashback, while Kat Dennings is a prostitute who befriends him. There's also Elias Koteas as one of the bad guys. All put in better than expected performances.

Defendor is nowhere near as bad as first impressions or the trailer makes it look. It's actually more Kick-Ass than Blankman, and worth a look. I wanted it to put me to sleep, but I wanted to see how it ended. Yeah, a bit predictable, but I liked it. And there you go.