A Trip to the Moon in Color 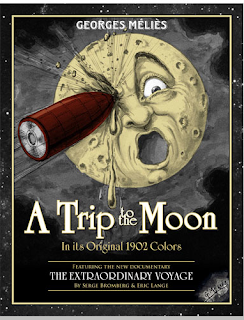 The 1902 classic short by George Melies, A Trip to the Moon, known in the French as Le Voyage Dans Le Lune, is the stuff of film legend. Only fifteen minutes long, even if you're not a film buff, you've seen parts of, if not all of it. I'm showing my age, but it was most notoriously used as inspiration for the Smashing Pumpkins music video of "Tonight, Tonight" as well as in the film Hugo. And those are only recent memory. 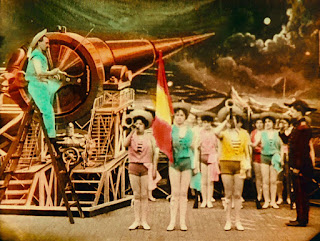 At well over a hundred years old and one of the earliest films, it was itself inspired by the Jules Verne works From the Earth to the Moon and Around the Moon. At the time this was a huge production with lavish special effects and the best theatrical actors France could offer. It even stars writer/director and film pioneer Melies. For its time, it was a big deal, and quite an international sensation, showing audiences what film could do, and ushering in, long before the age of the blockbuster, the special effects film. 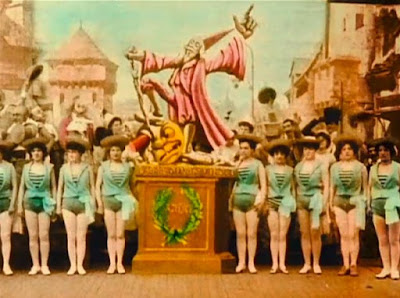 The short is of course the stuff of madness, the word surreal does not quite cover the insanity. A group of scientists, looking more like wizards or heretics at first, get on a bullet-shaped rocket - shot from a gigantic cannon - and visit the Moon, where they meet its explosive inhabitants. It's madness, but visually stunning, and one of the earliest achievements in special effects and science fiction cinema.

As if that wasn't enough, the black and white silent short A Trip to the Moon was originally proposed - and made - in color. In fact, the hand-colored print was for almost a century considered one of the great lost films. In 1993 a badly damaged copy of that print was found and restored, using newly colored segments of other versions in 2011. As if the film was not already fifteen-odd minutes of madness, the bright colors bring it to an acid trip level of surreality. 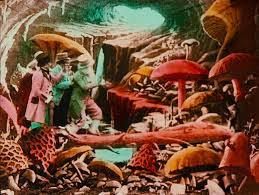 Add in a weird progressive art rock score by Air, that would make even early Genesis and Pink Floyd fans blush and cringe, and we are clearly in pot smoke filled midnight movie/planetarium rock territory. This new soundtrack however do what it should, give the already stunning visuals a new spin, a different take, and for that I applaud Air.

Besides the insanity of sight and sound, and the short's stature in film history, there is also the underlying theme of imperialism, and the eternal imagery of the rocket stuck in the moon's face. Also of interest are the real life parallels to the actual trips to the moon that the film predicts, like the earth rise and the splashdown. 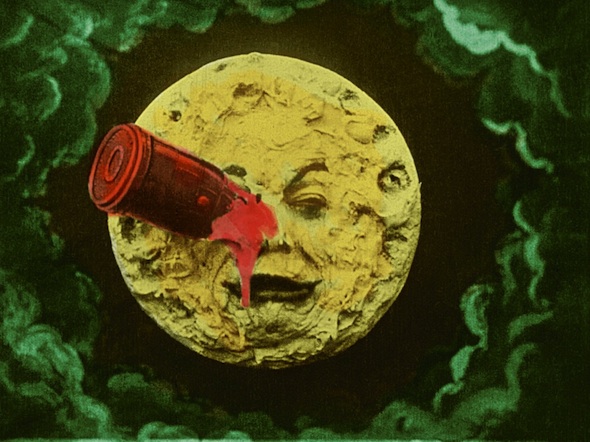 In black and white or in color, with or without sound, George Melies' A Trip to the Moon is a must see film classic.