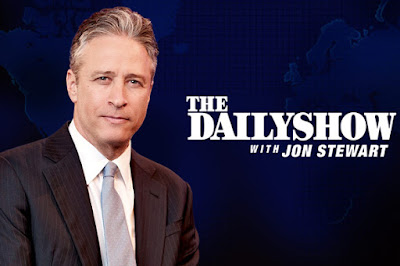 A lot of people are going to hate me for this, but I'm not a regular viewer of "The Daily Show," not since Jon Stewart came on board sixteen years ago actually. His arrival marked a change in the show. Before, with Craig Kilborn, I kinda dug it, but when it became a news show with comedic elements as opposed to a comedy show about the news - I checked out.

The main thing that has always bothered me about this incarnation of "The Daily Show" is that there are people who think it is news. There are folks who hang on Jon Stewart's every word as if he's this generation's Walter Cronkite, and I think that's sad. Just as I think that more than half of the programming on CNN, MSNBC, Fox News, and others should have a big sign on the screen that says OPINION when they are doing that instead of reporting the news, I think "The Daily Show" should have one that says SATIRE. 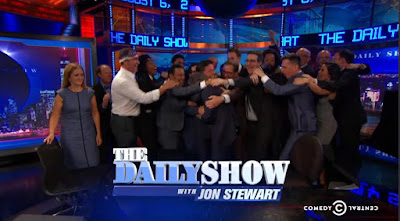 The more Jon Stewart got political, and the more he took himself seriously, the less I liked what I saw. This wasn't what I was tuning in to Comedy Central for, ya know? And if I wanted to see one-sided fake news by people who think they're clever, let's face it, I'd watch Fox News. So yeah, I am neither a regular viewer nor a fan, but I did watch the final episode with Jon Stewart last night. 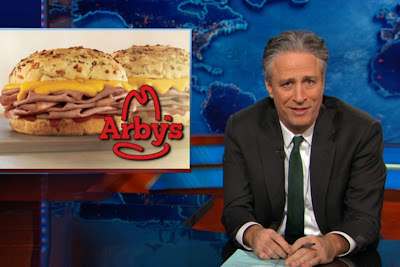 I enjoyed the SNL40 vibe of the returning correspondents, good to see many of them again, as those reports were something I did dig about "The Daily Show," and I am a fan of the official and unofficial spin-offs with John Oliver, Larry Wilmore, and even Stephen Colbert. And opposed to SNL40, it did not go on too long. As a fast food aficionado I have to say I loved the Arby's commercial, that was a touch of class.

So despite not liking the show, not being a fan of either Stewart or his concept of the show, I have enjoyed it from time to time, and enjoyed the final episode of his run. Even Springsteen was pretty awesome. It wasn't bad, even with the preaching about 'bullshit.' I think would have rather had them actually talk about the Republican debate, but as it stands, we all know the debate was much funnier. I look forward to a new take by incoming host Trevor Noah.