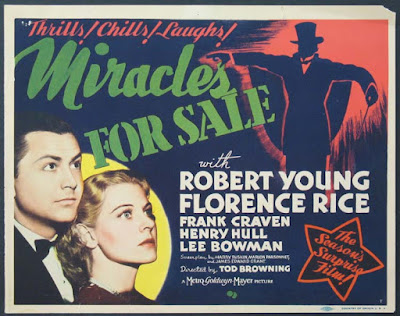 Miracles for Sale ~ Tod Browning's final film is not only pedestrian and toothless, but also a big disappointment for this Browning fan. Miracles for Sale from 1939 is based on the mystery novel, Death from a Top Hat, by Clayton Rawson, the first in a series featuring the Great Merlini character.

Only a very young Robert Young (who plays the Amazing Morgan, inexplicably changed from Merlini) really stands out in this murder mystery wrapped up in the world of magicians, escape artists, and con men. TV's Uncle Charley from "My Three Sons," William Demarest has some fun here too as a (surprise) curmudgeon.

One would think this setting would be right up Tod Browning's alley, but he never really takes hold and makes it his own. Reminiscent of Houdini's war on frauds late in his life, only nowhere near as exciting, this one has little of that old Browning -pardon the pun- magic.