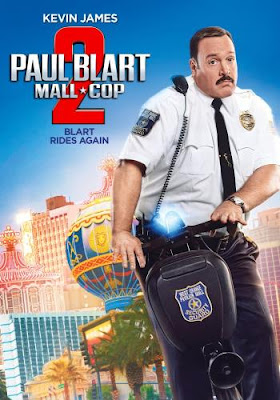 Paul Blart Mall Cop 2 ~ The film seems to take the first few minutes to completely undo the happy endings of its predecessor, almost as if it didn't want to think about it, or acknowledge it, or possibly the flick was written without knowledge of the first movie. This struck me as a bit odd as both were written by star Kevin James and frequent collaborator Nick Bakay. It's okay however, as this is a whole new adventure for Paul Blart.

Despite its juvenile comedy reputation, I was quite fond of the first Paul Blart Mall Cop movie, with its cunningly subtle remaking of Die Hard. In this installment, six years after the original, Kevin James' Blart has been invited to a security officers convention in Las Vegas. He thinks he'll be a star because of his actions in the first movie, but that was a long time ago. He's joined by a cadre of oddballs in his field, including his former "King of Queens" cohort Gary Valentine with a very disturbing hairpiece. 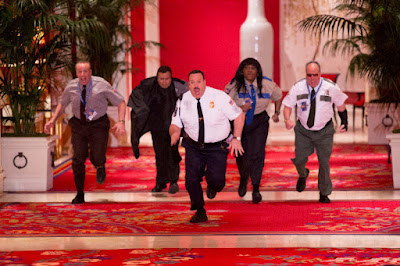 Besides dealing with his daughter trying to leave the nest, a less than exciting B plot, there is also something funny going on at the Wynn Hotel (getting lots of free publicity), as a gang of art thieves are planning a major heist. Yeah, hilarity ensues, and only Paul Blart Mall Cop and his new comrades can save the day. Kevin James is adequate, Valentine steals all the scenes he's in, but Ana Gasteyer and Loni Love are criminally underused here.

I did have a hearty laugh a few times at Blart's comic book superhero kryptonite weakness of hypoglycemia. And I loved the Mini-Kiss cameo. Beyond that however, this was still a decently amusing passage of time. The heist scenes are top notch. Good for the kids.

Don't forget to check out my interview with the director of this flick, Andy Fickman, here at Biff Bam Pop!, and be sure to see his new movie, The Scout's Guide to the Zombie Apocalypse.