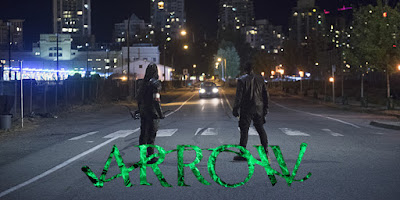 As I began watching this episode of "Arrow," I had momentarily forgotten the scenes of next week's episode at the end of the last episode. "Restoration" didn't start with the usual bang. Green Arrow and Diggle were fighting the H.I.V.E.'s ghosts and not getting along as per usual this season. They need to grow up if you ask me. Even in Nanda Parbat, it was business as usual with Nyssa trying to kill John Barrowman's Malcolm Merlin as the new R'as Al Ghul. This was all old territory. 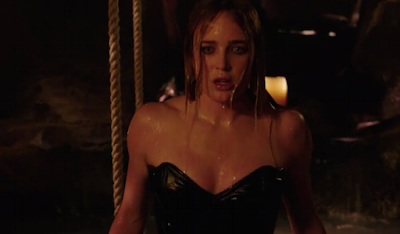 Even when Laurel and Thea arrive at the lair of the League of Assassins with the body of Sara in tow, the situation is neutered. We know Sara is going into the Lazarus Pit and coming back to life because we've seen her in the trailer and other scenes from the upcoming "Legends of Tomorrow." Please don't give pretense to suspense that just doesn't exist, and especially do not prolong it. 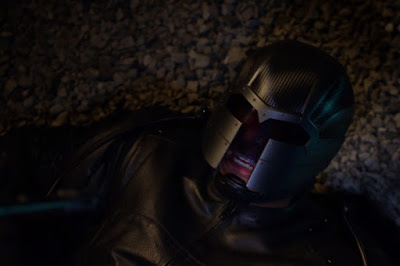 Luckily we get something new when Diggle arrives home to find an A.R.G.U.S. agent in his house. He says Lyla hired him to track the folks behind the death of Diggle's brother. The prime suspect is a Mina Fayad, who's just flown in from Markovia to help Damien Darhk with his vigilante problem in Star City. She's brought a recent nasty from the Flash's comics Rogues Gallery named Double Down. 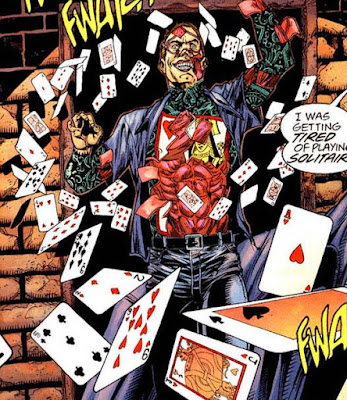 While Diggle tracks Fayad on his own, Green Arrow goes solo against the scary metahuman Double Down. In the comics he was once criminal Jeremy Tell who got mixed up with a cursed deck of cards that bonded to his skin, and later he developed the ability to hurl these razor edged cards at opponents, simultaneously scaring the crap out of them as he peeled them off his skin. This frightening villain was created by writer Geoff Johns as a longtime inmate of Iron Heights, possibly inspired by the Golden Age Flash story, "Deal Me from the Bottom."

The TV version of Double Down is a victim of the particle accelerator explosion in Central City over on "The Flash." Rather than supernatural in origin and visceral in visual, this Double Down's powers are more like turning tattoos into physical objects than peeling off skin. Essentially he's more Tattooed Man than Double Down. 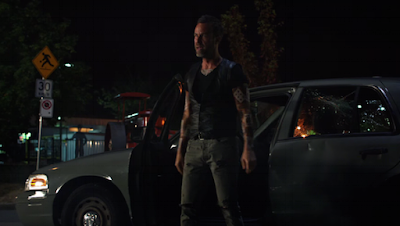 Over and above the Nanda Parbat subplot with its constantly changing Lazarus Pit rules, and the Oliver and Diggle finally working together to find Mina Fayad, or even the mind-numbingly boring Flashback Island stuff, the real action is with Double Down. Felicity, just as Oliver did seasons ago, goes to her employee for help on a case. In this case, she goes to Curtis Holt with one of Double Down's cards. 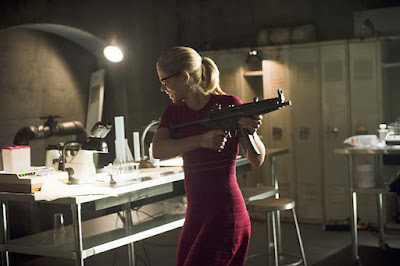 Not only do we get some intriguing explanations on how Double Down's powers work, we also get a peek at the prototype of what will become Mr. Terrific's T-Spheres. The card however not only leads Double Down to them, but also down to the new Arrowcave. Curtis gets a crash course in his employers secret life, and I absolutely loved when the villain takes him down Elevator Action style. And in a nice change of pace, Felicity fends off the meta.

Over on/at Nanda Parbat - where is this place anyhow? I always had the sense it was in the Himalayas, but in the "Arrow" series, it seems like it's just a few blocks away because it takes no time at all to get there and back. Regardless, Malcolm finally agrees to put Sara in the Lazarus Pit, and she emerges a savage animal. Sigh. Yeah, they are going to prolong this.

I must say this episode was a bit of a refreshing change of pace. Usually the A story with the super-villain is boring on "Arrow," with the gold nuggets coming in the subplots and character bits. Here, I loved the parts with Double Down, and wish there had been more.