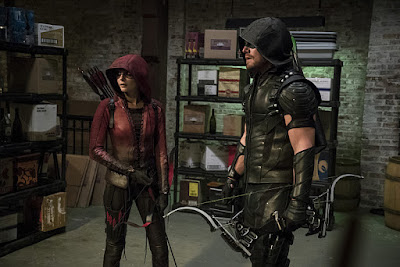 With the mystery of who's in the grave at the end of last episode still lingering, we enter a new age on "Arrow." The Green Arrow and Speedy patrolling the streets of Star City, wow, that's just enough to put a smile on this fanboy's face. Add in a Black Canary and a T-helmeted Guardian and I'm all in. The war against the ghosts of Damien Darhk continues.

I liked the bit in the opening where Felicity wants a codename. Even though she's effectively Oracle, she can't really take that name, or can she? She also suggests that Diggle needs a codename as well. Guardian, as I hinted at above, would be nice. The T-helmet however might be more indicative of a new character introduced in this episode - Echo Kellum's Curtis Holt. 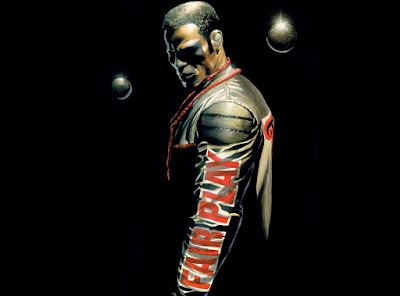 Initially introduced as the smart guy at a Palmer Technologies board meeting, he is much, much more than that. He's the live action TV version of Mr. Terrific. In the comics, Michael Holt is the second hero to hold that title. The first is one of my favorite Golden Age superheroes. A polymath, a renaissance man, the man of a thousand talents, and the third smartest man in the world, Mr. Terrific just rocks. Sadly, Mr. Terrific is not here yet, and Diggle is probably not him anyway. It'll be Curtis Holt. 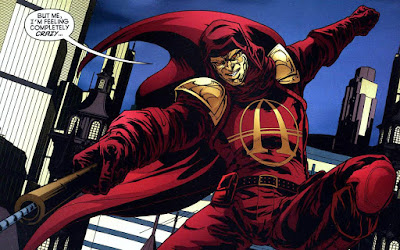 Then there's the mayoral distraction. It's become a bit of a joke that anyone who wants to be mayor of this city dies. So when Queen family friend Jessica Danforth (played by an aging Jeri Ryan) steps forward, we already know she's in trouble. An assassination attempt is made on the new candidate by yet another Batman villain, this time, it's Anarky, not one of my favorites, this relic of the grim and gritty anti-hero eighties is of course working for Darhk and H.I.V.E. In a nice callback however, it's mentioned that used to work for the Bertinelli crime family. 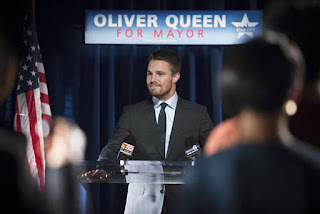 This whole mayor thing may seem to be leading to a place from the comics where Oliver Queen runs for mayor, but I'm going to say it doesn't happen, despite how it feels at the end of this episode. The showrunners know better. We live in a nation that is unfortunately divided near-violently by politics. If Oliver runs, he would have to declare a party or at least leaning, and the last thing a TV series wants to do is alienate half of its audience. So, I'm saying it's not going to happen. 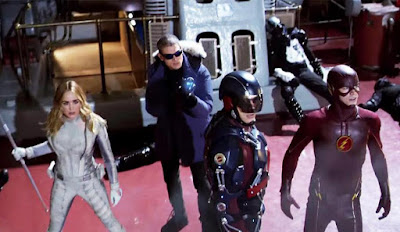 Apparently the madness that comes upon folks dipped in the Lazarus Pit has a cumulative effect as opposed to an immediate effect when it comes to the TV version. Thea is going slowly 'pit crazy' along the way. The brother/sister tension increases as Oliver brings it up to her. Laurel volunteers to talk to Thea, and try to get her to relax, but once alone, it turns out she has other plans.

Laurel, finally learning what the Lazarus Pit really is, has decided to bring her sister back from the dead. We know it's probably going to work because of the presence of the 'White Canary' in "Legends of Tomorrow,' but that peek inside Sara's coffin was not a hopeful one. 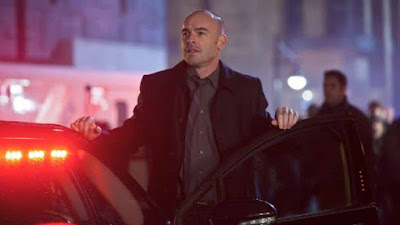 Speaking of coffins, we're back to the question of who is in that grave at the end of the last episode. Let's mark off the possibilities. Quentin Lance is number one on my hit parade. As the Larry Lance analogy, and pissing off Darhk this episode, we know his time is limited, but is his time up yet? There's also Diggle, who would add to the angst and guilt already in Oliver's wheelhouse, especially since they haven't quite made up yet. It's not Felicity as many folks believe, because, let's face it, Barry would cry like a baby if it was her. My bet is on Lance, then Diggle.

Speaking of the Flash, the baddie of the week next episode is a Geoff Johns addition to the Flash's Rogues Gallery, a rather bizarre and creepy one, if I may say so myself…