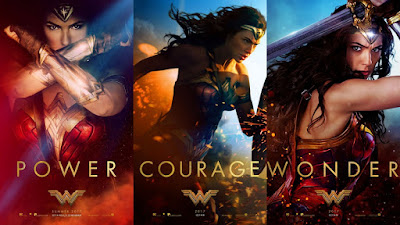 Wonder Woman ~ I hated the first two film entries in the DC Extended Universe, absolutely hated them. Man of Steel and Batman v. Superman: Dawn of Justice were seriously bad enough to put me off DC superhero movies forever. That said, I gave number three, Suicide Squad a chance, and while it wasn't great, it wasn't bad. Maybe DC movies weren't cursed after all. I sincerely hoped not, because number four in their film plan was very special to me. Wonder Woman is one of my favorite characters in comics, and a misstep with this one would cut the cord for me and DC Comics movies. I shouldn't have worried. Wonder Woman was amazing and astonishing, better than any of us could have hoped.

The Bride and I had first wanted to see the film at the Silver Moon Drive-In, our new favorite place to see movies in Florida, but Mother Nature had other plans and we were rained away. So I got tickets online for the Cinemark Lakeland Square Mall, and soon realized that we had been spoiled by the intimacy of the drive-in experience. What kind of asshole shows up late, brings a crying baby, and texts intermittently throughout the movie? Oh yeah, that kind of asshole. No more theaters for me.

There was a good side to the theater experience this time however. Tiaras were everywhere, and it was so odd seeing so much cosplay outside of a comic con. This never happened at any Marvel movie I've seen. I even heard people talking deep about "Marvel's Agents of S.H.I.E.L.D.," and nobody watches that show but super nerds like me, and when I turned around I saw they were hot teenaged girls - I was shocked. Everyone who was there seemed to be hardcore, truly Wonder Woman's first cinematic adventure was a major event.

I suffered through Batman v Superman again recently, albeit mostly on fast forward, to assure myself I remembered it correctly, and I was right.  Gal Gadot as Diana Prince/Wonder Woman is by far the best thing in the movie, outshining the two titular stars.  There's no comparison, and here, in her movie, its true as well.  Much like Lynda Carter before her, Gal Gadot embodies Wonder Woman. 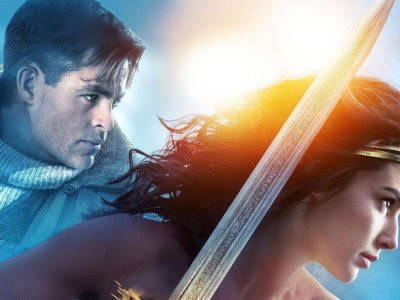 And as much as Gal Gadot is Wonder Woman, Chris Pine is not Steve Trevor, but he is damned good at playing this character they call Steve Trevor and his chemistry with Gadot is beautiful. It pains me at the end when he sacrifices himself.  Not just because it's something that dopey damsel in distress, office jockey, and war hero by chance Steve Trevor from the comics would never do, but because I wanted more of him with Gal Gadot.  They're that good together.  And while I'm still not sure of the romance and love scene between the two, I think it was done as well as it could have been done. 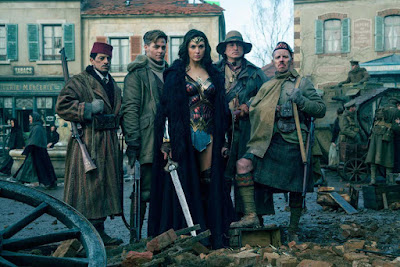 I want to be clear.  I loved this movie, this is an awesome flick.  I'm just not sure this is the best Wonder Woman film it could be... for me.  This is about choices.  There are choices made that I wouldn't have made, I would have done it differently, but then again there are reasons I'm where I am doing what I do - and not making great Wonder Woman movies.

The first choice would be the time period.  The filmmakers chose World War I over World War II.  It could be interpreted that this was done to decrease comparisons with the cinematic Captain America.  While Cap did appear a full six months in the comics before Wonder Woman, the latter feature was published continuously since that first appearance.  Captain America has had many stops and starts including being frozen in ice for several years in continuity.  Plus, on television it was previously established that the Wonder Woman of the 1940s was the same as that of the 1970s.

Then again, one could say that WWI, also known as the Great War, and the War to End All Wars, is a more fitting war to lure the Amazons to intercede.  That does work, but then there is the nature of the villains to consider.  WWI Germans may well later have become WWII Nazis, but they don't come off as sinister or truly evil as the Nazis.  Just ask Gail Simone or William Marston, Wonder Woman works best against Nazis. 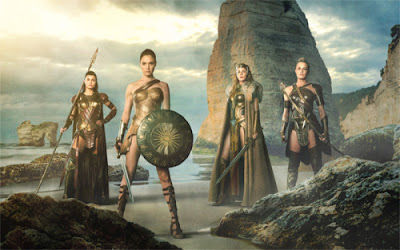 Other choices made that bothered me was the lack of a contest to take Steve Trevor back to Man's World, the missing Robot Plane (or invisible jet, depending on your age), and no bullets and bracelets on Themyscira.  This last thing makes the Amazons extremely weak when the Germans attack early on.  They are beaten easily because of the enemies' guns - and they shouldn't have been.  Bullets and bracelets is one of the things that make Amazons cool, and hell, make Amazons Amazons. And again, I would have loved to see the contest from the first WW origin.

Also, speaking of the Amazons, Diana not being able to return to Themyscira pretty much eliminates half of her supporting cast.  With this limitation we are left with only Steve Trevor (now assumed dead), and Etta Candy, wonderfully portrayed by Lucy Davis from Shaun of the Dead and the much-missed "Reaper." I loved watching her heft the Godkiller sword, and couldn't help but remember it being said that only a true warrior could wield it. Just wait. Surely I'm not the only one who remember Etta being trained by Diana in the Golden Age. I did wonder where General Darnell was but I suppose his presence would have gotten in the way of the surprise villain. It should be noted however that there is a Colonel Darnell in the IMDb credit list.

While we're talking about the Amazons, props have to be given to Connie Nielsen from "Boss," whose Queen Hippolyta is both stern and loving, and Robin Wright from "House of Cards" who steals every Amazon scene she's in as General Antiope.  Training young Diana in secret until she is the finest warrior on the island, Antiope embodies the Amazons as I always imagined them - wise and beautiful, but ready to kick some ass if needed.  Artemis and other Amazons are also there, not in speaking roles but listed in the credits. Perhaps we will see them again in the sequel - oh yeah, there had better be a sequel. 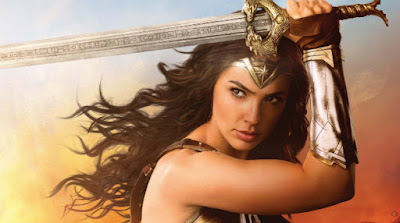 There is also the matter of people being killed in this movie. I didn't mind it by the bad guys, that's why they're bad guys, but Wonder Woman should not have been killing people left and right. If you think about her original arsenal, it's all non-lethal. If one recalls the lyrics of her television series theme song, the line is "stop a war with love," killing is not a thing. Of course this may all be a matter of continuity semantics as the film also incorporates Wonder Woman's more modern powers, weapons, and even her New 52 and Rebirth origins. 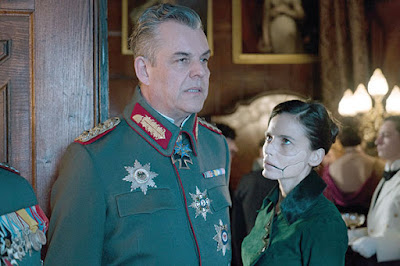 I was okay with the Godkiller sword, and her demigod status, and even her thunderbolt powers, mostly because they made them work in the film, even though these are newer elements of the character that are not my favorite. Most of the credit of this movie being so good is due to director Patty Jenkins and the co-writing skills of Allan Heinberg, who not only wrote Wonder Woman in the comics, also created Young Avengers, worked on "Grey's Anatomy," as well as "The O.C." and even the 2011 "Wonder Woman" TV pilot. but I've also had the opportunity to interview him several years back. Great guy and a terrific writer.

When it comes to the villains I was in heaven. I have always loved Wonder Woman's sadly underappreciated and underused rogues gallery, was always disappointed that hardly any were used in the television series, and will fight anyone who thinks she had lousy villains. Anyone who says that knows nothing about her villains. Here in the film, we actually had four, maybe five featured. I loved it.

When I saw Dr. Poison in the previews I was giddy with excitement and surprise, as she's very old school and Golden Age, and I love her. I thought her interpretation was intriguing as it was dead on, and added elements of Doctor Cyber to her look. General Erich Ludendorff (who was not only a real dude, but an early Nazi and a worshipper of Wotan, whoa) is a version of WW archfoe the Duke of Deception, although not credited as such in the film, even though I wish he had been. Also according to the credits, we had Fausta and Orana in the background as well. And of course, the main villain, and Wonder Woman's major nemesis in the comics, was Ares the god of war. Cleverly played by Remus Lupin himself, David Thewlis, Ares is everything he could have been onscreen. I was surprised, and amazed. 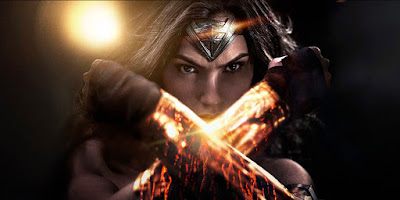 I found the motley and multicultural crew that goes with Wonder Woman and Steve Trevor into enemy territory an interesting addition. I appreciated the Easter egg that Andre from the Blackhawks was among them albeit under an assumed name, but it seemed a little bit too Ant-Man to me, especially for a film that was so cautious of bringing up comparisons to Captain America. Still I liked them, and the connection to the present with the upcoming Justice League film and the previous BvS.

As I said, Wonder Woman is incredible, and has raised the bar for not just the DC Extended Universe, but for superhero movies across the board. This is must see, folks, and then see it again.