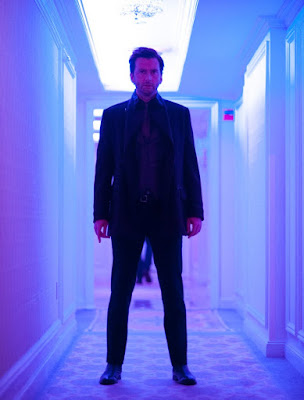 Here's the problem, and it's a most disturbing one. David Tennant, who plays Kilgrave here, and played The Doctor for several years on "Doctor Who," is so damned charismatic. As one of the most diabolical and immoral villains of the Marvel Universe, when he's trying to be nice, trying to get into Jessica Jones' good graces, we almost believe him, as if we too have been influenced by his powers...

In a bit of stalker-ish sociopathology Kilgrave has purchased Jessica's childhood home, refurnished it just as it was, invited her to live there with him, all done without the benefit (?) of his powers. To say this is effed up is an understatement. Mutual consent, her choice, and her love, is all that he wants. 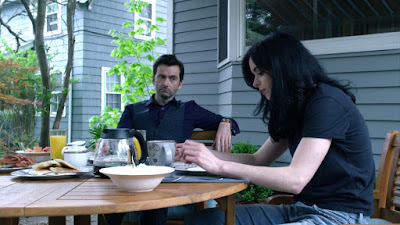 The edge is thick in the air as Jess tours the home of her past surrounded by ghosts, as well as Kilgrave, and his paid bodyguard Hank, plus a chef and a maid. Through dinner, breakfast, conversation with a neighbor, Kilgrave tries desperately for domestic bliss, all with the undercurrent of sociopathic house arrest.

Trish calls, worried about Jess, and worried about her new beau Will Simpson. He's gone AWOL. We find he's in the house, has planted a bomb to finish off Kilgrave once and for all. Jessica disarms it and sends Will packing. When Trish does catch up to him, he still doesn't tell her the truth - what else would one expect of a future super-villain? Instead he tries to convince Trish to forget about Kilgrave, and that Jessica can take care of herself. 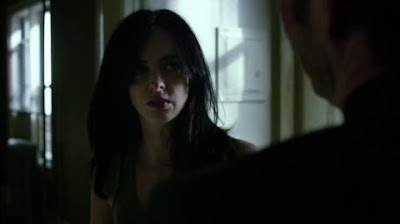 All of it however pales in comparison to the heated discussion at the heart of the episode. Kilgrave raped Jessica. He raped her physically, mentally, and emotionally. He is a true monster. He may have given her everything she wanted, pampered her with fancy clothes and hotels and restaurants - but she wanted none of it. Not to make light of the situation, but bottom line, no means no. 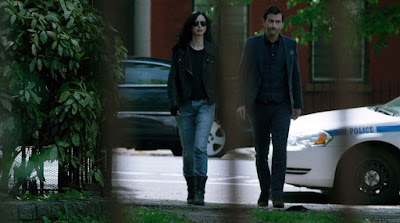 Just when the writing veers into something real, it slingshots back to supermax idiocy. Jessica tries to make the Purple Man a force for good. It's a fun idea, it's a comic book idea, and not one fitting to the psychological crime noir that is "Jessica Jones." Somewhere along the way, and especially in this talky flip-floppy episode, the show has run off the path.

As much as I worried early on about the chemistry between Jessica and Luke Cage, perhaps I should have been more worried about it between her and Kilgrave. Their scenes together are not as tense as they should be. Separately and reacting to each other they are great, but together on the same side, no. It's just one of the flaws of the show, like the Jeri Hogarth divorce that I just don't give a crap about. 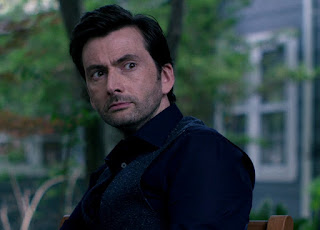 But it always comes back to Kilgrave. As earnest and charismatic as the monster is, he always defaults to evil, from having knives at the throats of the paid help to the humiliation of Jessica's neighbor to the brutal final ending of this episode, Kilgrave is ever the villain. Thankfully Jessica remains true to herself as well... even if I never expected her to fly...