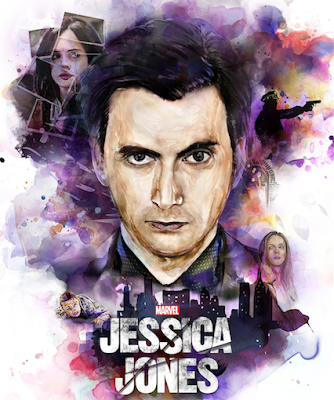 We had a short reprieve in the last episode, but just like that, the horror is back. We open on Kilgrave rooting through Jessica's office in the dark, taking a leak (something I never imagined I'd see a "Doctor Who" title actor do), and then greet one of her creepy twin neighbors at the door. It's Ruben, one half of the couple that makes Cersei and Jaime Lannister seem normal. When Ruben admits to Kilgrave that he loves Jessica Jones, the Purple Man leaves his corpse in her bed as a gift.

David Tennant's Kilgrave is surely the most terrifying super-villain in the Marvel Cinematic Universe. Yeah, and I'm counting Thanos the space God who worships death. Tennant, through simple facial expressions, gestures, posture, and a modicum of dialogue, is simply chilling. While the tone of "Jessica Jones" has been primarily that of modern film noir, there have been moments of pure horror, and they belong solely to Kilgrave. The Purple Man, or Zebidiah Killgrave as he's known in the comics, was at first a rather silly villain, created by Stan Lee and Joe Orlando. A Croatian mutant who actually had purple skin and hair, he was chiefly a Daredevil villain. I was aware of him years before I ever actually read a story with him in it. I first saw him in the Emperor Doom graphic novel where Doctor Doom used him as a weapon against the Avengers and the Champions, and eventually enabled the armored monarch to rule world temporarily. 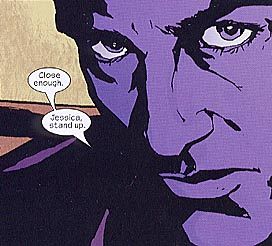 Largely considered a joke or one-note villain, he vanished from the comics for years. He fathered a daughter, the Purple Girl, who appeared with Alpha Flight briefly. Killgrave would reemerge triumphantly and horrifically in the pages of Alias, under the creative power of Brian Michael Bendis and Michael Gaydos, as a major force in the backstory of Jessica Jones.

David Tennant, most well known as The Doctor in his tenth incarnation, brings the villain to life here on "Jessica Jones." He's not purple but wears it, has a strange supernatural glow of the color, and all of his lighting has that weird hue. A vastly better and moodier effect, I must say, than actual purple skin. The showrunners also altered the spelling of his name, and have yet to call him 'the Purple Man,' all of which I'm fine with. But I'm never going to look at The Tenth Doctor the same way again, Tennant is that scary. 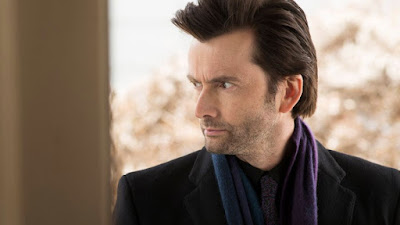 With the murder of Ruben, Jessica is at her wit's end, and has come up with an insane plan. A ridiculous plan, if I may, one more fitting an episode of "I Love Lucy" than a 2015 entry in the Marvel/Netflix Television Universe. She's going to get herself arrested and put in a supermax prison, and when Kilgrave comes after her, they'll trap him there. I'm waiting for Ethel Mertz to join Team Jones any second now. 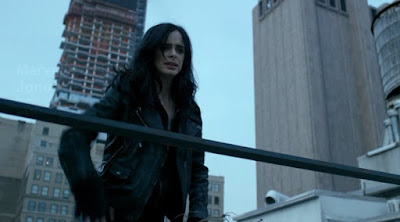 The rest of the cast revolves around her as she finalizes plans. Pre-Hellcat and Proto-Nuke are still going at it like high school kids, but Trish does know where to find Kilgrave's bodyguards. They're helping him move in. To the house that he bought last episode. Jessica's childhood home. And for some effed up reason Simpson isn't telling Trish what he sees, he lies to her. He even sees what happens at the end of this episode before the credits roll... is he still in Kilgrave's thrall?

Jessica moves through the episode preparing her goodbyes, like stopping by Luke's bar, making sure Jeri can be her lawyer, and threatening Trish's mom (Jessica's foster mom) to leave her daughter alone. Both Trish and Malcolm try to talk Jessica out of her plan to no effect. And Robyn, now told by Malcolm that her brother was involved with Jessica, is weirder than ever. Wait 'till she finds out what really happened to Ruben.

Malcolm, now that he's straight, is a great character. If the rumors are true and he will also be in "The Defenders" on Netflix, I wouldn't mind at all. Eka Darville is very good. And as long as Trish is there as Hellcat, I'll be happy.

When Jessica turns herself in to the police with the severed head of Ruben in tow, we get a return of Clarke Peters from "The Wire" as Clemons but he's sadly given little to do. Kilgrave has invaded the police station and made everyone pull guns on each other. He wants her released, and for her to come home - but it has to be of her own choice.

In the end, with nothing else to do to stop him, and no other way to save others from him, Jessica goes home, to Kilgrave...