The Monsters Are Back 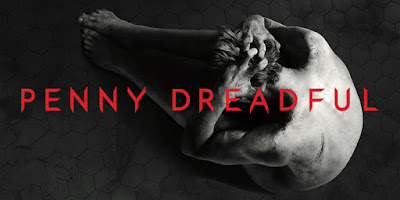 In this season of "Penny Dreadful," we have moved beyond the world of the penny dreadful and into the one of its American counterpart, the figuratively more expensive dime novel. As the protagonists have all gone their separate ways and formed new alliances - Lily and Dorian, Hecate and Ethan, Victor and Henry, Malcolm and Kaetenay - and spread to different corners of the world, it gives the show an HBO vibe with quick cutting to display the many characters. This tact also builds anticipation for when our 'heroes' once again meet and merge subplots. 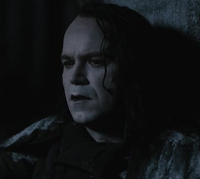 As a fan of the original stories I was excited to see Caliban/John Clare, our Frankenstein monster, in the Arctic. I was yet equally excited to see him searching for his lost past in Chinatown. Might it be too much to wish for an appearance by another Victorian villain, Fu Manchu? Or might the legal rights be too difficult to navigate? 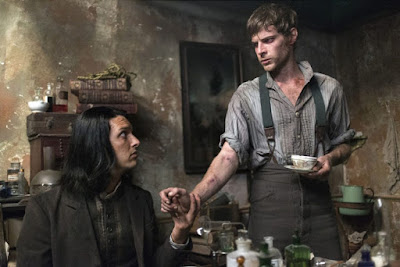 The concept of Victor Frankenstein and Henry Jekyll (a black man in this continuity) being old school chums and fellow outcasts is a charming and imaginative one. I like it quite a bit. Their clashing and contrasting philosophies of science and the evil of man make their partnership one of both madness and wonder, and I love that they are currently quartered in Bedlam, the prime place to conjure horror of that age. Think how they could anger God together. 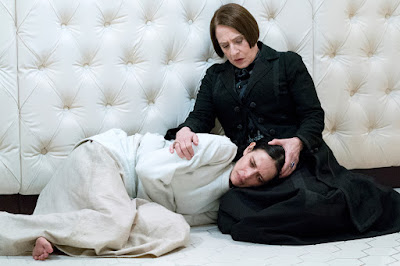 I applaud the addition of Patti Lupone to the cast, though not in the part she had been playing (and should have gotten a Emmy for, the Cut-Wife), but as Dr. Seward, a gender-switched version of the character from Dracula. Notably she is a distant relative of her former role, and is not the only new addition from that book. We also have Renfield, complete with fly obsession, as her secretary and the titular monster himself in the guise of Alexander Sweet currently romancing Seward's patient Vanessa Ives. Dracula is of course not the only big bad waiting in the wings, as Lily and Dorian Gray are still plotting a domination of the human race and are teaching a young girl, Justine, their evil ways. Reeve Carney and Billie Piper are deliciously evil and have certainly come a long way from Spider-Man and Rose Tyler, Defender of the Universe.

Patti Lupone is not the only new cast member this season, there's also award-winning Native American actor Wes Studi. Unfortunately he is filling the role of the magical Negro that Danny Sapani's Sembene thankfully avoided in the first two seasons. Hopefully there is more than meets the eye with his Kaetenay character in the dime novel sequences of this season. 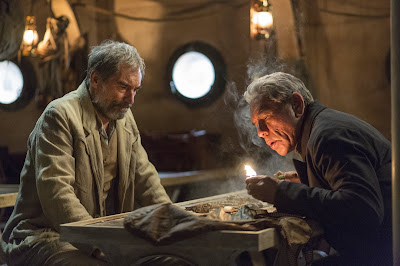 I am unsure where the subplots in the American West are going, even though I am enjoying them the most, but I do hope the London stories end with that old kaiju eiga trick of turning the monsters against each other. That would be awesome. Either way, I'll be watching this season.

For a different point of view on "Penny Dreadful," please check out friend and author Marie Gilbert's reviews of the series here at Biff Bam Pop!.