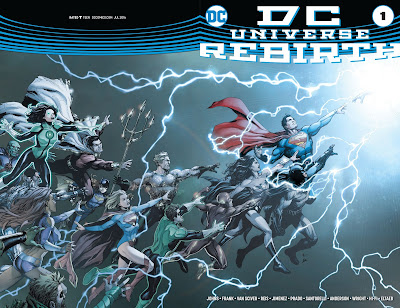 This was supposed to be the book of the week, the big comic book event, but Marvel Comics trumped it by making Captain America a Hydra agent. Yeah, it sounds like a headline from the Bizarro World doesn't it? I guess that clinches it. Marvel Comics hates superheroes more than Fredric Wertham. But while Marvel is stumbling backward into darkness, DC Comics is forging forward… to rebuild their broken universe, their broken characters, and reach out to readers old and new, rather than drive them away. 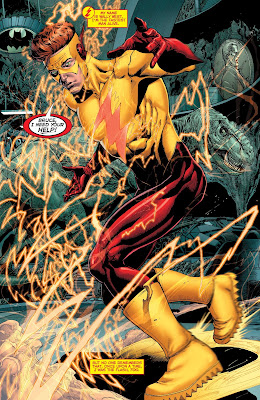 On point with this endeavor is writer Geoff Johns, who after fifteen pages of DC Universe Rebirth had me smiling. I don't smile at DC Comics, not in a long time now. The story follows Kid Flash, the real Kid Flash, Wally West from the old days, as he tries to find his way out of the Speed Force, and contact his old friends to warn them. Yeah, warn them of a danger that may have caused the New 52 Universe, and apparently no, it wasn't Flashpoint.

And about that, for those who haven't read it, here come the spoilers, so act appropriately. While I loved Watchmen, even the movie, the videogame, and a few of the prequels even, I have never been one of those fans that held it up as holy and untouchable. Alan Moore has written a few good comics, yes, but he is not a god. So the core thrust behind what caused the New 52 Universe and stole a decade from my favorite heroes and sliced and diced their memories is okay with me. I actually kinda dig the idea, and can't wait to see it further explored. 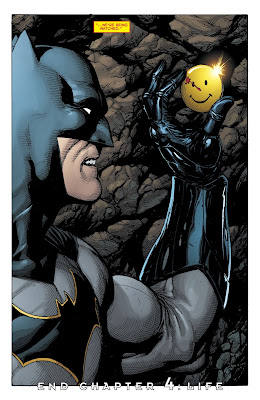 Now that that is out of the way, I can talk about how much I enjoyed this book. I loved seeing Wally again, and his tour of the New 52 Universe made things even better as we got to see Batman, Johnny Thunder, the Atoms, the Blue Beetles, maybe Saturn Girl, and so many others. I loved seeing Wally's origin relived through new artists' eyes, and the mystery of the three Jokers, the sadness of a Green Arrow and Black Canary who don't know each other, Aquaman's proposal to Mera, and really, who didn't cry when Wally encountered Linda Park, and then Barry Allen.

I honestly don't know which, if any, of the new DC Comics I will be picking up, but I will say this - they have my interest, and I sure as hell enjoyed this issue, and want to see what comes next! What did you folks think?