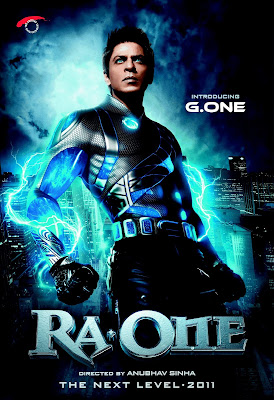 RA-One ~ This film has a lot in common with the recently reviewed Enthiran - The Robot. And while it follows Enthiran, and exists within the same continuity, it is not a sequel. Much the way the solo Avengers films led into the main Avengers movie, Chitti the Robot makes a cameo here. Being a comic book fan, I'm a sucker for universe building, and that's exactly what Tamil science fiction is doing - creating a cinematic superhero universe.

The story here is nothing new really, derivative, but still original enough, and made magical by CGI and various other animation techniques. A videogame designer creates the ultimate super-villain, RA-One, for a virtual reality videogame where the player becomes the hero G-One to fight him. Like Enthiran, there are dazzling and mindboggling special effects, but at its core is a touching father and son story, that of the designer and his son. 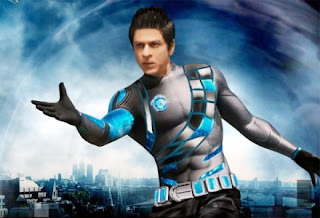 Things go awry when RA-One gains sentience, and the designer must become G-One to stop him from destroying the real world. The battle sequences between G-One and RA-One are phenomenal. It is just amazing to me how other cultures seem to know better how to use American superhero concepts cinematically than most American filmmakers.

Like most Bollywood films, this has everything - action, comedy, romance, a couple if very scary moments, and of course terrific musical sequences. I really liked this film a lot, great videogame and comic book sensibilities, and like Enthiran, I bought the soundtrack as soon as I was done watching it the first time. Great fun.