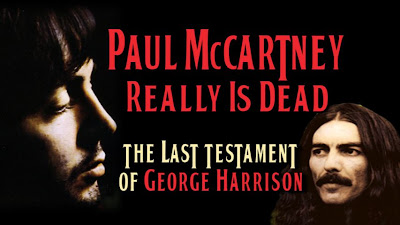 Paul McCartney Really Is Dead ~ This one has the also just as intriguing subtitle of "The Last Testament of George Harrison." It comes from the gist of this documentary being tapes discovered by George Harrison disclosing the horrible secret that has burdened the Beatles for decades - that Paul really is dead. The tapes are George's confession. Yeah, if you smell the Blair Witch, don't worry, I do too.

Apparently all that nonsense, all those hints about the hoax that Paul was dead - it was all true. As suspected, Paul dies in a car crash. MI6 has a double, William Campbell, after cosmetic surgery, join the band as Paul. The remaining Beatles, under penalty of death keep quiet, while still leaving clues on their albums and in their music as to what really happened. 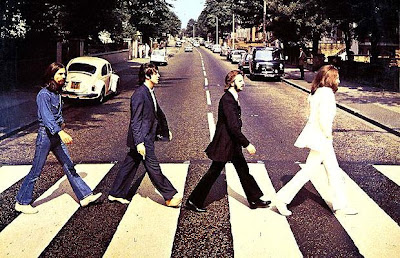 Supposedly, the voice of George narrates a somewhat skewed history of the Beatles and thereafter, with these new facts inserted, creating a new truth. All the usual stuff is in here, along with some shocking new bits. One truly bizarre addition indicates that 'Lovely Rita,' who witnessed Paul's death, is actually, wait for it, Heather Mills.

As a kid, it was always fun to find the clues, but come on, we all knew it was a hoax. I gotta give the producers props for trying at least. It gives new meaning to many lyrics previously thought indecipherable, a nice touch. A fun, if at times, rather sinister, faux documentary/conspiracy theory.