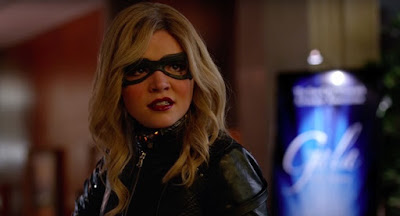 In the aftermath of the death of the Black Canary, even in a world where death is not always the end, Team Arrow is shattered. John Diggle blames himself for her death because he believed his brother Andy had changed, and Quentin Lance is simply in denial, thinking she can come back... and seeing as he's already had another daughter come back from seeming death twice, really, who can blame him? 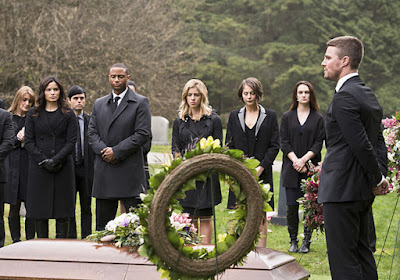 We open on a funeral, but not the one you might think. Laurel Lance is giving the eulogy, and it's Tommy Merlin's funeral. Oliver should have given the eulogy, but couldn't. The day of Tommy's funeral is the Flashback Island thread this episode, showing how Laurel helped Oliver through the death of his once best friend. It also gives Katie Cassidy a last chance to shine on the show.

To complicate matters, the Black Canary's sonic device is found to be missing from the hospital, and someone is out there on the streets masquerading as the Black Canary. This teenaged girl not only has a vendetta against our heroes, but she's turned up the power on the device and Team Arrow is no longer immune. 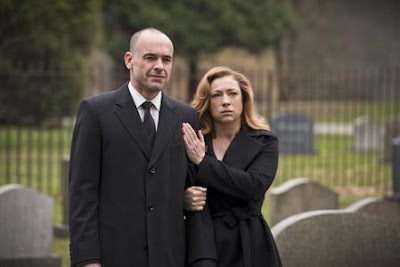 Interestingly the faux Black Canary attacks Alex Davis just as he's about to open up about his past to Thea, saying that he works for them. Our girl knows more than she's telling. I'm still betting that Alex is both related to the Davis on the list, and to Silver Age Green Arrow villain Dr. Davis. Time will tell, it's not like these DCTV shows don't do the villain-among-us thing all the time. Yeah, I'm looking at you, Caitlin and Win. 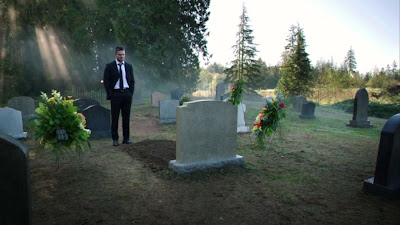 New Mayor Ruve Adams puts out warrants on Star City's vigilantes, especially the 'Black Canary' who murdered Laurel Lance. This comes after Spartan's attack on the Mayor, one in which Green Arrow calls John by his name. Between this and Barry on "The Flash" lately, I am so tired of these title heroes making really stupid mistakes.

Speaking of the Flash, Grant Gustin shows up after Laurel's funeral to bring that sequence full circle. To keep Ruve Adams' ploy at bay, Team Arrow put on the gravestone that Laurel was the Black Canary. Clever, but troubling. We end as we began the season, with Oliver vowing to kill Darhk. But how?