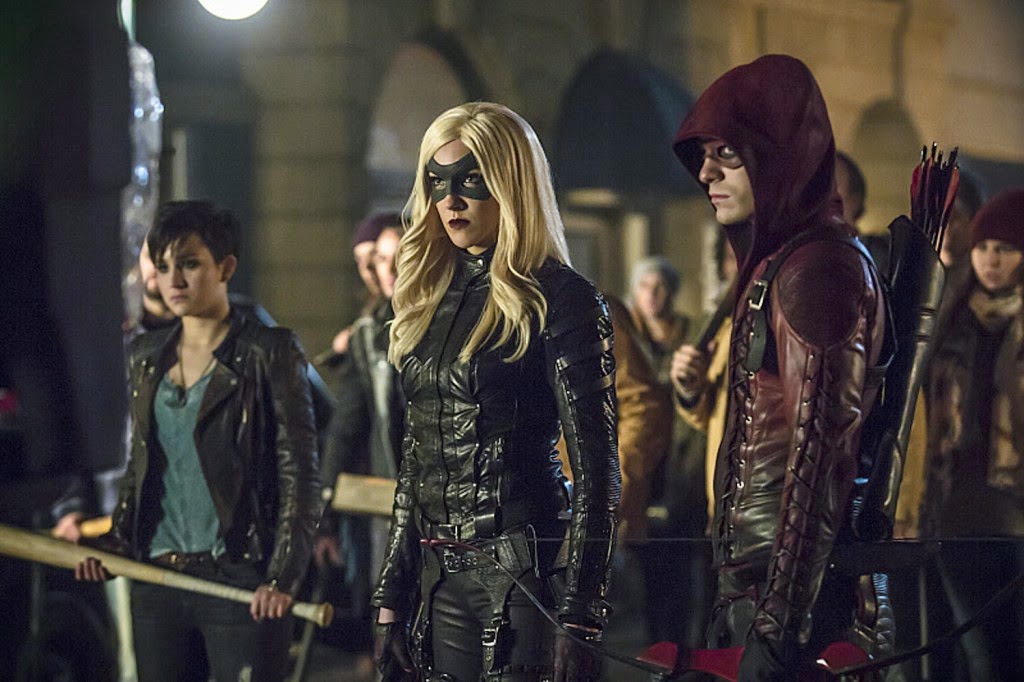 Brick is now in control of The Glades, which is no longer under police surveillance. We open on Arsenal trying to rescue a diner from paying protection to the crime boss. We have two great references here as a baddie mistakes Roy for the red blur seen over in "The Flash," then we have the oh so rare use of the word 'superhero' in this series. The spandex set is catching on in the Arrowverse.

The baddies get the better of Arsenal and Laurel as the Black Canary/Canary comes to the rescue. She's fighting considerably better than she was in the last episode, and Ted Grant is even given props. It's nice to see Bex Taylor-Klaus as Sin again, but unbelievable that she mistakes Laurel for Sara. And Quentin knows Roy immediately but can't tell his daughters apart?? Seriously I know I ranted about this before, but this is getting ridiculous. 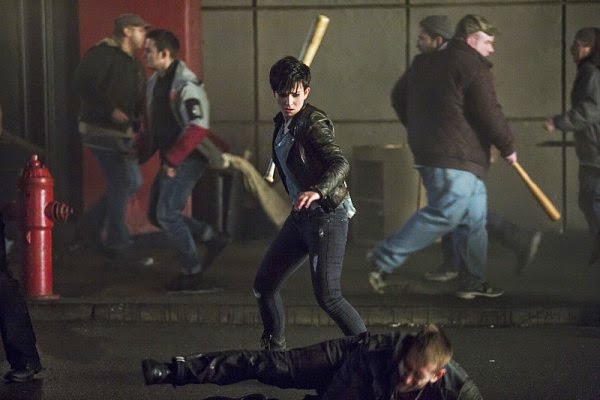 Sara and Laurel are two completely different body types, one short and curvy with believable blonde hair, and the other tall and lean with a bad wig. No one, unless at a major distance, would mistake one for the other, especially family and friends. If this situation of the two Canaries was always intended to happen, which it's been indicated it was, the two actresses cast in the sisters' roles should have resembled each other more. This confusion of the two is stretching my suspension of belief a bit. And yes, I see the irony. I'm okay with a man who can run at the speed of sound, but this is too much. Sue me. 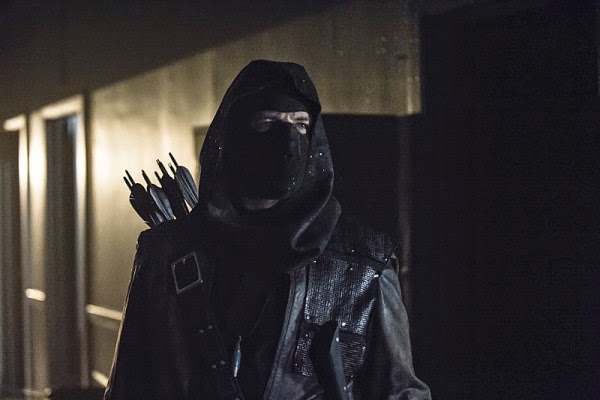 I know that John Barrowman has signed on as a cast regular but more and more it feels like the writers are having a hard time finding things for him to do. Having Brick be the murderer of his wife seems like a stretch to have him team up with Team Arrow in Oliver's absence. And when is Felicity going to beef up security so Merlyn can't keep walking into the Arrowcave? Maybe she could find his bug as well. Too much Atom and not enough Arrow in her life I suspect.

In line with giving Barrowman more of a spotlight, we get the secret origin of Merlyn the Magician, Flashback Island style. I'm sorry, I love Captain Jack as much as the next fanboy, but I'm not sympathizing. Keep the villains villains, and Merlyn works much better as a super-villain adversary than a sympathetic anti-hero. I love him, but it might be time for my favorite Time Agent to take a powder. 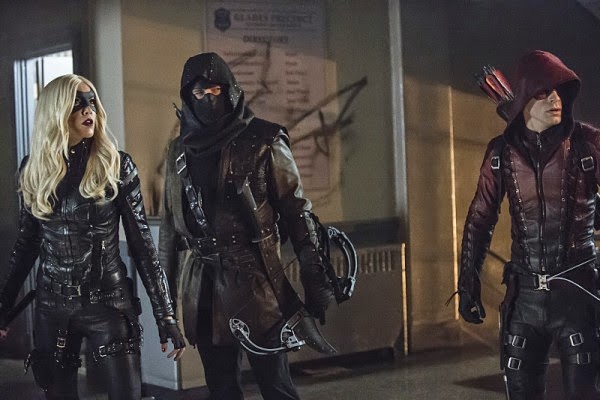 The street fight revolution suggested by the episode's title is just absurd. Team Arrow rallies the citizens of The Glades, including Sin and Wildcat (!), to rise up and take back their neighborhood from Brick. First, why would Team Arrow do something as irresponsible as endanger the lives of innocents? And we see people on both sides of the fight with guns, so why is no one shooting? It's all brawling. I could swear some on Brick's side had machine guns - why aren't they mowing people down?

Things have been sloppy on this show for a while, and they don't seem to be getting better. The back and forth state of Ollicity is only a symptom of the real problem. The powers that be are being sloppy with the characters, the stories, and the details. I really hope it gets better before it gets worse.

Questions brought up by this episode - When is Thea going to just stop believing everyone at face value? Why don't both Roy and Thea question the knowledge that they know the other really shouldn't have? Wouldn't Felicity already have everything the police have on Brick, and more? And as much as I love Vinnie Jones, why wasn't an African-American actor chosen to play African-American super-villain Brick?

Next: Vertigo, and Canary vs. Canary.

And if you'd like to discuss this episode and anything else in the Arrowverse, please join the Arrow discussion group on Facebook.