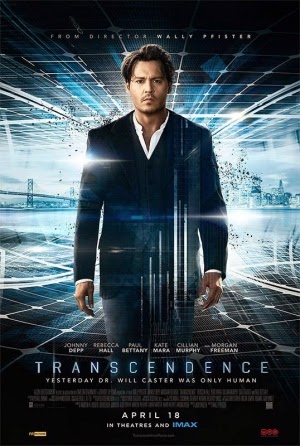 Transcendence ~ The idea of uploading a human consciousness into a computer is an old idea. It's a retro idea, a cyberpunk idea, and therefore like rayguns and rocketships, a science fiction future that's just not going to happen. It's a potential future that's become outdated. If you're going to make a movie about that, you'd better have a new spin, you'd better do something different, something that's never been done before.

I must say I was impressed with the brief opening on an internet-less future, where keyboards are used as doorstops and even phones are back to the drawing board. We flashback five years to Johnny Depp pioneering artificial intelligence. I don't need to tell you the predictable outcome - man to AI to god - and Depp goes all Lawnmower Man until he's stopped. Now I said it had to be different, and it is, Johnny Depp's indecipherable accent of unknown origin that changes constantly for almost two hours is certainly different.

Despite excellent performances by Cillian Murphy, future Avenger Vision Paul Bettany, and as always Morgan Freeman (pretty much everyone except Depp), I really disliked this flick, and I'm a cyberpunk fan. It had very little new take to offer, a good but old idea done badly - avoid this one.