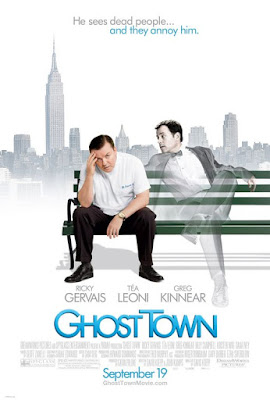 Ghost Town ~ David Koepp has written some amazing movies, some of my faves like the most recent Shadow flick and the first Spider-Man, but for the most part he leaves me cold. The last Indiana Jones movie and the Tom Cruise War of the Worlds spring immediately to mind. So it’s with trepidation I watched Ghost Town which he wrote and directed.

Alternately I love Ricky Gervais, but only from his standup and especially HBO’s “Extras.” Don’t even ask about “The Office.” I have yet to be able to sit through an entire episode of either series from either side of the Atlantic. Some folks love it, but it continues to elude me.

Ricky however, completely carries this film. Without him and his caustic personality this would be a painful and unfunny Lifetime reject of a telemovie. This comedic play on the concept from The Sixth Sense wears pretty thin without him to hold it together. I’ve never seen Greg Kinnear more annoying, and Tea Leoni’s talents are wasted in her role.

To me, there’s no secret why this heartless comedy that tries too hard and is a tad bit predictable bombed at the box office. Worth a look only for Ricky Gervais fans.